Web collaboration startup Central Desktop has raised $7 million in a first round of funding. The company has already found some success targeting small businesses, and chief executive Isaac Garcia says he plans to use the new funding to expand the product and make headway with bigger clients.

Central Desktop faces plenty of competition, both from startups like 37Signals, with its project manager Basecamp, and major tech players like Microsoft’s Sharepoint, but Garcia says the Pasadena, Calif. company stands out as a “one stop shop” for collaboration. In other words, Central Desktop offers some of the broadest range when it comes to features — it includes project management (like Basecamp), collaborative productivity tools (like Google Apps) and online meetings (like WebEx).

With 120,000 customers, the company seems to have found a niche for itself — Garcia says most of Central Desktop’s clients have looked at Basecamp (which, again, is focused on project management and doesn’t offer collaborative word processing, spreadsheets, etc.) and want more, but don’t have the IT resources to set up and support something like Sharepoint. Google is also starting to focus on the enterprise market (as signaled by its recent partnership with Salesforce), but Google Apps’ consumer roots are still obvious. For example, while documents can be shared, they’re still based on around the individual — one person creates a document and decides to share it with other people. Central Desktop, on the other hand, is built around the concept of a workspace (see screenshot below), where documents are shared with all members of a team, an approach that makes sense for larger projects. 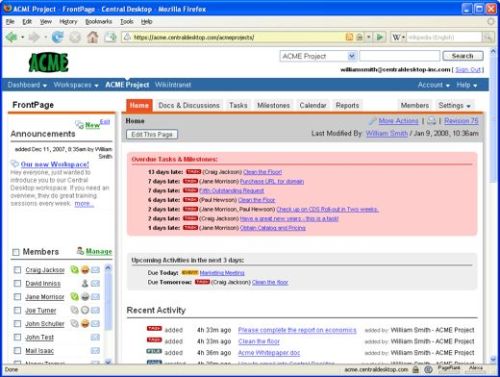 One of Central Desktop’s most interesting recent customers was Barack Obama’s presidential campaign, which used the product to train precinct managers and keep them updated. Obama’s California campaign was the first to sign up, and it was happy enough with the company that the Texas campaign became a customer, too. (And although Obama received fewer votes than Hillary Clinton in both California and Texas, Garcia is quick to point out that Obama actually won more delegates in the latter state.)

Central Desktop has been bootstrapped and profitable since it was founded, Garcia says, and it’s reached a crucial point in its development, when it can either get acquired, or raise capital and try to build itself into a bigger company. Garcia sees an opening in providing collaborative tools for medium-sized businesses, and he hopes to establish Central Desktop as the leader. Some of that growth will involve sales and marketing, and some will involve expanding the tools. One of the first goals is to create more integration with Microsoft Outlook, which is used by 70 percent of Central Desktop’s customers.