Only 52 percent of companies rate their “digital IQ” as strong, according to a new survey from PricewaterhouseCoopers. In the previous survey, that number was 67 percent.

PwC has been doing the survey for a decade, and this year’s survey collected data from 2,216 business and technology executives.

After a decade of compiling responses from across industries, PwC found that businesses are becoming less confident in their digital IQs.

In addition, investment in emerging technology is stagnant. In 2017, the average investment reported by respondents was 17.9 percent, only marginally higher than the 16.8 percent in 2007, despite the radically changed landscape and digital’s importance to business success. 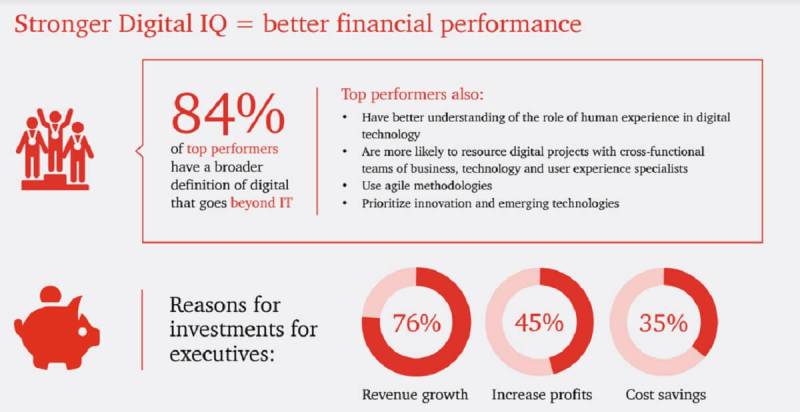 Digital is still human-based (robots haven’t taken over yet). While digital IQ is inherently about people’s ability to adapt to change and grow a global hive mind utilizing digital and emerging tech, there is still a major skills gap for employees doing the digital work.

Digital is also hard to execute: Only 52 percent of respondents say digital projects are delivered within scope and on time. The most common obstacles cited are a lack of support in organization (76 percent), lack of clarity on roles/responsibilities (72 percent), ineffective management (71 percent), and ineffective talent (66 percent).

In 2007, “digital” was just another name for information technology. But today’s definition of digital refers to emerging technology, the cloud, artificial intelligence, the Internet of Things, and more. Business leaders point to the added complexity and higher stakes around digital today as possible explanations for a lower digital IQ.

Today, digital is much more than just tech — it’s a mindset, a way of working, and a core part of doing business, PwC said.