I have just about wrapped up my trip to CES 2020, the big tech trade show in Las Vegas. I walked more than 37.45 miles (over 84,385 steps) this week to scout for the best ideas and products of the show.

In the name of consumerism, I took in as much of the 2.9 million square feet and as many of the 4,500 exhibitors as I could manage.

These winners captured my imagination by demonstrating what might be possible with technology or what is practical for products in the near future. Some of the products won’t ship in the next year, and some may never ship. Others are already generating revenue.

Three of the winners were back from last year’s list as they made interesting advances in their efforts to change the world, or my face. P&G Ventures’ Opte, Zero Mass Water, and Impossible Foods have taken impressive strides in the last 12 months.

I’ve expanded the group to include a few more fresh winners, so we’ve got 14 on the list this year. I’m glad I traveled the extra distance to see some of these products because they make me a believer again. It’s easy to get jaded and dismiss everything. It’s tempting to skip the show. But I always find that my curiosity takes me back to Las Vegas in search of the magical products that will change our lives.

Some of these picks may not seem impressive on first glance. But they all caught my attention and stayed in my mind throughout the week. I feel like I got another glimpse into our future at CES, just as I have for the last 23 years or so. I’ve included videos where I have them, and I hope you enjoy the ride.

To our great agitation, mosquitoes are adept at avoiding human vision and then attacking us when we aren’t looking. But now we can fight back with computer vision and a laser pointer.

Bzigo spent a few years researching how to spot buzzing mosquitoes, and it showed up at CES with a prototype. Bzigo’s infrared camera uses unique optics and has a processor running computer vision algorithms to actively scan the room, differentiating between a mosquito and other pixel-sized signals, such as dust or sensor noise.

Bzigo trained its AI to recognize mosquitos and their erratic flight patterns. Then it follows them until they get tired and land. Ben Resnick, head of marketing, said in an interview that the product then shines a laser pointer on the spot and it notifies you by a text message that it has found a mosquito. You can then go and kill it.

The team figured it can’t use the laser to kill the mosquito because it’s dangerous to have a high-powered laser zapping things in your home. But the tough part is finding where the mosquito lands. 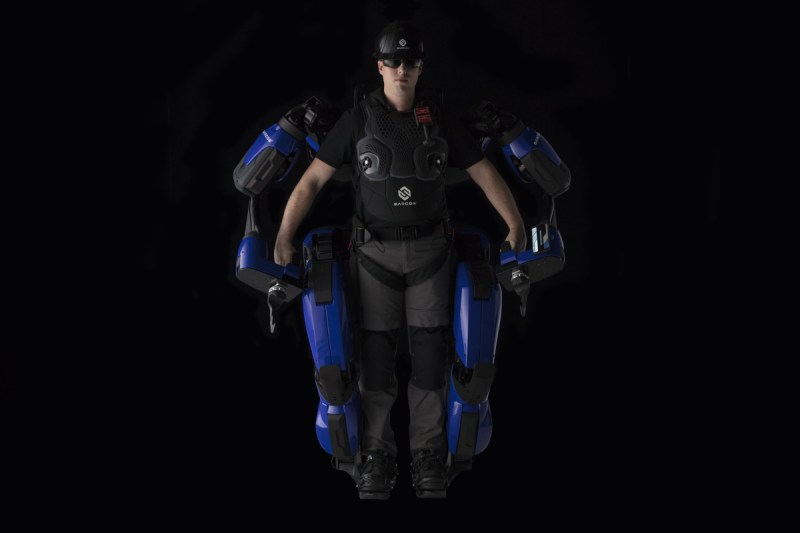 Above: Guardian XO is an exoskeleton for Delta’s baggage handlers

The mechs are coming. Delta Airlines CEO Ed Bastian showed up to give a keynote speech at CES 2020, and much to our surprise, he brought technology with him.

Bastian and Sarcos Robotics showed off Guardian XO, an exoskeleton that operates just like a mech suit from movies like Aliens. But instead of killing Xenomorphs, this exoskeleton lets luggage handlers save their backs. It enables them to pick up objects that are 20 times heavier than normal. An employee could lift 200 pounds continuously for eight hours.

Delta could implement the tech for baggage handlers as early as this year.

MedWand aims to fulfill the potential of telemedicine, inspired by the Star Trek Tricorder, a magical device carried by Dr. Leonard “Bones” McCoy in the 1960s television show that could diagnose and heal injured people, said Samir Qamar, CEO of MedWand.

MedWand has 10 different medical tools, such as a stethoscope, all built into a small handheld device that has software and a camera. It doesn’t do any healing yet, but it can broadcast test results from the patient to the doctor, who can then conduct an office visit remotely.

In real time, the doctor can collect a lot of vital signs and detect and follow numerous medical conditions from across town or around the world. As a physician, Qamar is biased toward allowing doctors to do the diagnosis themselves, rather than having the MedWand use AI to figure out what’s wrong.

The device is expected to be $400, and approval from the Food and Drug Administration is pending. 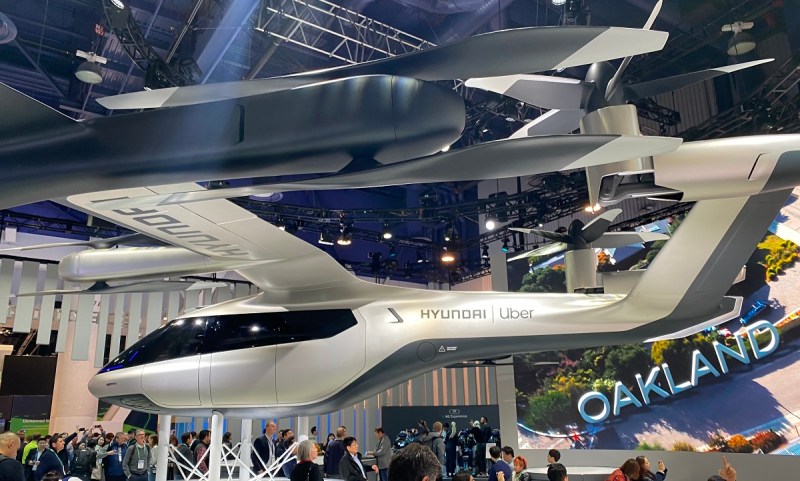 Above: Hyundai’s prototype for an Uber flying taxi.

Hyundai and Uber showed off a prototype for a flying car, an innovation that inventors have dreamed about for more than 100 years.

During its press event, Hyundai showed a small-scale model and a VR trailer of what a future city could look like, with ground transportation hubs where automated shuttles could deliver people. The passengers could then hop aboard a four-seat taxi with a couple of vertical take-off and landing engines. At Hyundai’s booth, the company displayed a full-scale prototype.

The companies still have a long way to go in solving problems like regulatory approval, battery life, and other details. The aircraft has a range of 60 miles, could go 180 miles per hour, and fly 1,000 to 2,000 feet above ground. Let’s hope these guys will get us where we need to go safely.

This connected city of the future is purely an idea at this point. But Akio Toyoda, CEO of Toyota, gushed with excitement about it, and he said the automotive company is quite serious about building the town on the site of a former car factory in Japan.

Toyota Woven City will combine a wide array of technologies, including robotics, smart homes, autonomous vehicles, the internet of things, digital health, and sustainable energy. It will be built on 175 acres of land.

It will have streets with three types of lanes: pedestrians, bicycles and scooters, and autonomous vehicles.

The idea is to test how to create a city from the ground up. The company hopes to house Toyota researchers and employees, families, retirees, retailers, students, and more. The company will build the city as a virtual world first, to test ideas and learn from mistakes, Toyoda said.