I have a complicated relationship with the annual trade show CES, formerly known as the Consumer Electronics Show. Having attended my first CES nearly 30 years ago, I’m a long-term believer in the value of the event as a media spectacle and networking opportunity; my CES experiences led directly to the career I have today. And I’m not just an average attendee — a decade ago, I worked directly with CES’ organizers to create one of the show’s major pavilions, developing a deep respect for the people and incredible infrastructure behind the sprawling physical event.

The complication: CES has become so exhaustingly huge and unwieldy that many attendees now consider participation to be akin to military conscription. I don’t personally know anyone who was excited ahead of last year’s show, and though I was both there and enthusiastic about what I saw, I was far from the only one feeling weary — then, over time, physically sick with a mysterious fever and cough. Months later, the 2020 CES was retrospectively identified as a likely mass infection zone for the coronavirus pandemic, and turned out to be the year’s last major tech industry event to avoid cancellation.

Despite those cancellations and seismic work-from-home changes within the technology industry, CES’ organizers have announced that they “plan to proceed as scheduled” with CES 2021: It’s going to be “another in-person event in Las Vegas,” coupled with “a wider selection of live-streamed CES content” and “many other engaging digital and virtual opportunities.” Rather than exhaustively listing new health and safety precautions for the event, the Consumer Technology Association (CTA) offered a “sampling” of plans that look a lot like the ones GSMA said it would adopt for MWC Barcelona before that similarly important event was scuttled over coronavirus concerns. At this point, you could correctly guess them yourself: sanitization, social distancing, wearing masks, and so on.

Even if I had never attended CES, none of the listed measures would make me feel comfortable attending the show next year. At every past CES, I’ve waded through crowds as dense as those that flooded U.S. airports after the government banned international travel, so I cannot imagine that CES attendees will realistically be able to maintain the 6-foot distances from strangers that health authorities mandate. I have even less confidence that all or even most of the show’s 170,000 attendees will keep wearing masks at all times while traversing the endless convention halls. It’s hard enough to breathe without a mask while rushing from building to building, booth to booth at CES, so why assume people will willingly accept the added moisture and heat of a protective shield on top of that?

Perhaps CTA has yet to announce additional measures that will thin the herds of attendees, such as even more stringent registration requirements, invite-only admission strategies, or another trick to cut down crowd sizes. But CES is marketed to exhibitors on the strengths of its large pool of attendees and massive scope. Would companies attend if only half the people were allowed to show up? And will people willingly go to a 2021 show that may have been a hot zone in 2020?

I’m honestly not sure at this point what will happen over the next few months — whether CTA will just continue moving forward with a largely in-person event, or radically rebalance the content to favor digital and downplay in-person attendance — but I don’t see “business (mostly) as usual” as being a viable solution at this point. Yet that’s the direction the organization appears to be taking, regardless of whether past attendees are comfortable participating in a physical event.

My belief is that CTA’s current effort to stay the course is due more to the organization’s momentum, structure, and external obligations than attendee concerns. First, CES 2021 will focus on an in-person event because all prior CESes have focused on in-person events. Second, CTA has unparalleled experience in making Las Vegas buildings and vehicles work together for a massive show, but less experience in hosting digital events. Third, it has made commitments to Las Vegas, and as The Verge points out, next year’s show would coincide with a nearly $1 billion renovation of the Las Vegas Convention Center — money that was no doubt spent to accommodate CTA and CES needs. If there’s no physical CES 2021 event, the damage to Las Vegas would be huge, just as MWC’s cancellation rocked Barcelona.

Don’t forget about exhibitors or CTA itself. Many companies committed to booths at CES 2021 while attending CES 2020, and whether they’re skittish or not, they need to start preparing budgets, booths, personnel, and announcements many months in advance of a trade show. Neither they nor CTA can afford to wait until November or December to be fully committed to a physical CES 2021. If they’re going to pull out, CTA would be better off redefining the scope of the show on the earlier side, rather than having massive pockets of space abandoned at the last moment. And who knows what impact mass-scale pullouts might have on CTA’s own fortunes? 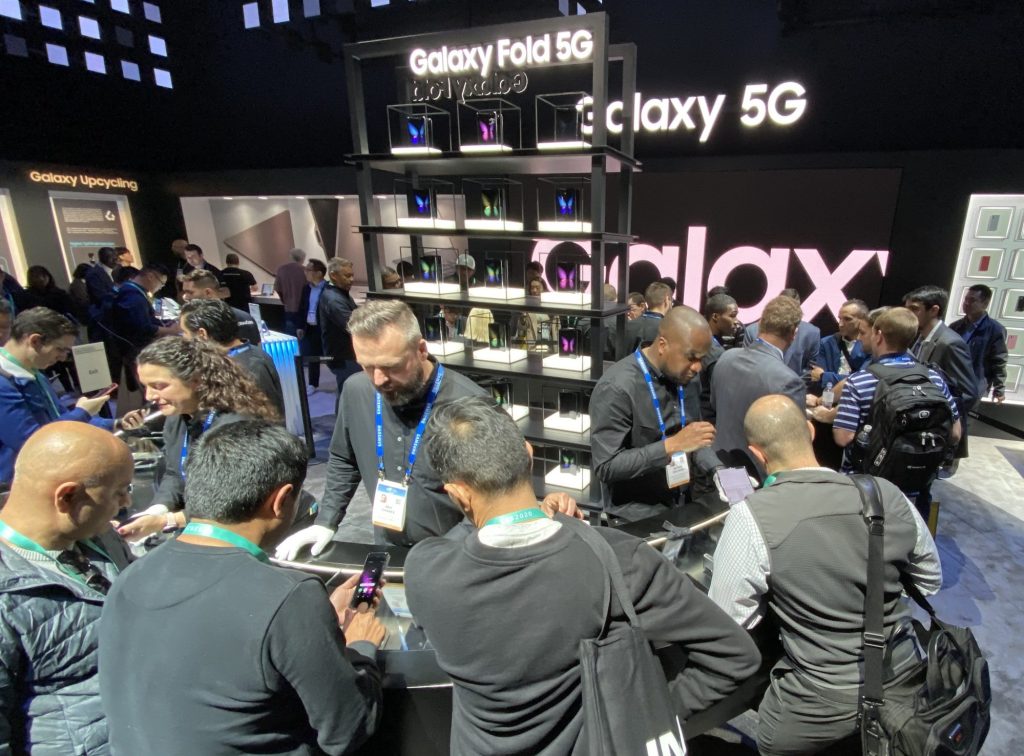 Above: How will exhibitors like Samsung offer “look but don’t touch” exhibits for devices such as the Galaxy Fold at CES?

Having said that, my belief is that attendees’ needs and public health concerns currently weigh against holding a physical show that looks like past CES exhibitions. It may be a difficult pill for CTA to swallow, but there has to be an alternative to shoehorning huge numbers of people into convention halls to gawk at oversized TV sets and cars. Expecting people to look but not touch or breathe on spotlighted objects is unrealistic — at least, to the extent that it would need to be to actually guarantee proper sanitization, rather than just claiming it.

The obvious alternative is to belatedly but substantially shift the show to a digital format, and thanks to COVID-19, I believe many if not most CES attendees are now ready to make that switch. April’s successful GamesBeat Summit 2020 demonstrated how virtual events have taken off this year in ways that could only have been imagined previously. Yes, people might have enjoyed attending the same event in person at the originally planned Los Angeles venue, but the online Summit actually enjoyed greater international attendance, and participants had zero need to worry about travel expenses, personal illnesses, or whether other people were sick. Those benefits and concerns are dramatically magnified for CES.

Pivoting to an almost entirely or all-digital format would surely be a substantial challenge for CES, given CTA’s history and those of the many legacy companies that participate in the show. But the results we’ve seen from GamesBeat Summit and subsequent online events are yielding plenty of evidence that the switch to digital was the right move for both organizers and attendees.

Only time will tell whether CTA stays on its present path for CES 2021. Having gotten sick during the last show, I hope that the organization dramatically modifies its plans before it’s too late, lest one of the year’s most important technology events becomes something people can’t even be conscripted into attending in person.