The International Consumer Electronics Show, the biggest geek fest in North America, has been shrinking thanks to the severity of the recession and its impact on travel plans.

But the show’s organizer, Gary Shapiro, president and chief executive of the Consumer Electronics Association, said in an interview that this year’s show should be stronger than last year’s. The group has intentionally scaled back the amount of space, eliminating the Sands Expo and using only the Las Vegas Convention Center. The result should be a higher quality experience for those who go. 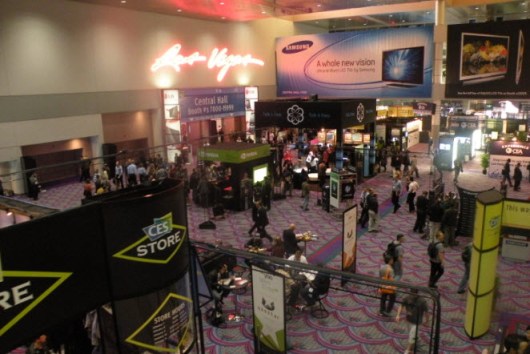 “We knew we would shrink, but the standard for tech trade shows is to be down 20 percent to 30 percent,” Shapiro said. “We will be down less than that. The strategy will be for a more dense show that is also more convenient. Despite what is still a very fragile economy, we have a show that is comparable to last year’s. It gives me hope in the U.S. economy.”

Even as physical trade shows are losing ground in the digital age, the show is still an important barometer of the health of the tech industry. It’s always interesting to see the rise and ebb of trends. This year, the show will feature hot categories from iPhone-related products to eBooks.

Shapiro says he doesn’t truly know how many people will attend, but his ballpark estimate is that the event will be slightly smaller than last year, at plus or minus a few thousand compared to the 2009 number. The number of exhibitors should also be comparable. One of the attractions is that hotel rooms in Las Vegas are about half of what they were a year ago. 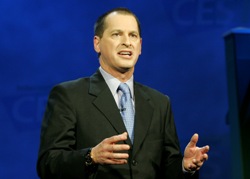 In the past couple of years, the show projected 130,000. This year, pre-registration is strong, but the show doesn’t require attendees to put down a deposit so it’s easy to cancel. A year ago, amid fears of a prolonged recession, lots of pre-registrants canceled between August and January. This year, the number of attendees planning to come is rising in that time period.

The total number of exhibitors will be similar this year, with 330 new first-time exhibitors taking part. That’s a record number of new exhibitors and it reflects some vibrancy in the startup category, Shapiro said.

“That’s both a measure of innovation and the health of the show,” Shapiro (pictured) said.

The show has 20 different technology zones, more than it has in the past. They includes the iLounge, a part of the show floor dedicated to Apple products. The group formed that zone after Apple decided to exit Macworld, which will occur in February in 2010. About 72 companies will display wares in that iLounge. But Apple has made no plans to be a big part of CES, and Steve Jobs will not be a keynote speaker.

The top speakers this year are Steve Ballmer of Microsoft, Paul Otellini of Intel, Paul Jacobs of Qualcomm, Olli-Pekka Kallasvuo of Nokia, Zhou Houjian of China’s Hisense, and Ford’s Alan Mulally. Houjian is the first keynote speaker from China in the show’s history. Those keynotes were moved from the Venetian back to the Las Vegas Hilton theater. Shapiro will also do a Q&A with Julius Genachowski, head of the Federal Communications Commission.

The Electronic House Expo was previously a stand-alone event, but now it will be part of the show. And so far, 118 groups have signed up to bring international delegations, including a delegation from China. Roughly 20,000 of the show’s attendees will be from overseas.

Sections of the show will be dedicated to green technology, digital health, higher education, young and old users, eBooks, robotics, netbooks and retail. Most major consumer electronics vendors from Panasonic to Sony will be at the event, but Shapiro said there is likely bigger representation of smaller companies. The show will be greener than in past years.

Besides eBooks, the presence of new trends such as 3-D movie viewing, navigation, and Windows 7 software will be evident. Shapiro expects the issues being discussed will focus on innovation, the economy, pricing pressures, the competitiveness of the U.S. industry, mobile TV, wireless spectrum usage and 3-D television. Lots of politicians will be in attendance, and Shapiro said the group will argue for policies that include encouraging innovation, attracting the best talent, free trade, flexible work places, and reasonable economic and taxation policies.

Shapiro noted that consumer electronics devices are selling well during the holidays. With lower prices, he said, “There has never been a better time to be a consumer.”