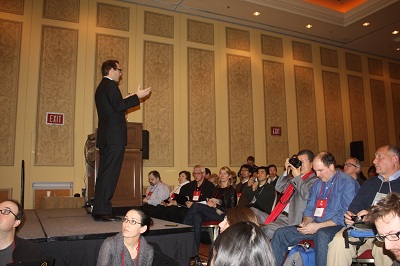 The PC still sells in great numbers and was once the center of digital electronics, but now smartphones, tablets and other devices are becoming the focus of the show, Dubravac said.

Dubravac said that we have seen a big transition in the past decade moving from analog stand-alone consumer electronic devices to digital devices. Now we’re moving into a second decade of digital. The average household in the U.S. has 25 CE devices, and the next step is to take advantage of those devices.

In a survey of attendees, the hottest devices are expected to be wireless technology and wireless devices, followed by lifestyle electronics. CES buyers said that the hot trends will be apps, tablets, connected TVs and others.

Dubravac’s big trends a year ago were “portable vs. pocketable” devices, the intelligence of things beyond computers, sensorization of consumer technology, and the shift from amplification to applification. There is a trend toward more and more apps, a convenient way to launch a software program simply by tapping an icon, on more and more platforms.

More than 100 tablets launched at CES last year, and a plethora of smartphones too. This year, more phones will launch at CES than ever before, Dubravac said. Many new CE devices, like Microsoft’s record-selling Kinect motion-sensing system for the Xbox 360 video game console, are really just collections of sensors that capture data and turn it into input for the device.

Wireless devices that couple with another, from blood monitors that transfer data to a smartphone, are also multiplying.