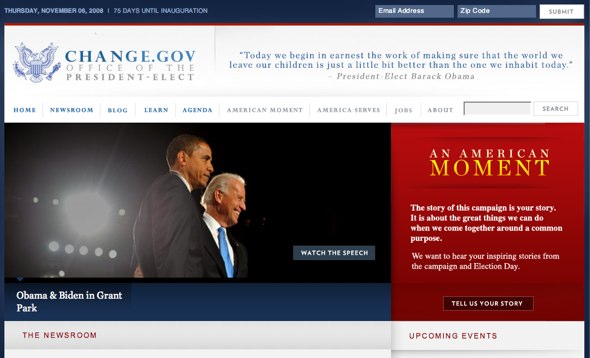 Change.gov is the first step in President-Elect Barack Obama’s plan to make national politics more transparent via the web. The site just launched, and so far it seems to be a bunch of information collected from press releases — you know, the same old thing.

Okay, that was a cheap shot. I am actually pretty hopeful that we’ll see some serious efforts here to make the presidency and other parts of the government more open. The administration is now accepting applications for people to help run the site, and says this about its goals going forward:

We will keep this transition process transparent, so that you will know which officials are being selected to serve in this administration and lead the country for the next four years. All staff appointments chosen for this administration will be committed to fulfilling Obama’s campaign promises, to rebuilding our government, and to serving the American people again.

Will Obama and his incoming staff blog about the problems they have during the transition? Will they blog about the complicated decision-making processes they must be go through in picking the Obama cabinet, like who will be the next Treasury Secretary? For now, the leaks that political reporters are getting have done a better job of covering those topics.

More importantly, will the site — and the administration — really follow through on making The White House more open to citizen feedback? Doing so could be quite fascinating. Here’s one interesting but technocratic idea that VentureBeat reader “CharBax” recently suggested:

I think they need to create an online congress where every citizen is a representative, can vote on all ideas, can suggest ideas, can amend ideas, express themselves in meaningful ways. Then all this needs to be done using clever algorithms to promote the good ideas automatically using clever new wisdom of the crowds algorithms. On the Internet, one vote shouldn’t count as one vote, votes should count proportionally with the influence and activity each verified user has on the rest of the community. This way, an algorithm can automatically filter out the experts and the representatives.

The new administration will be picking a “Chief Technology Officer” to oversee Obama’s tech policies and his pledges to do things like make the government more open.

Tech leaders who are already on the transition team include former IAC executive Julius Genachowski, Google.org’s Sonal Shah, and Donald Gips of Level 3. Any of those three could be our new CTO, as could a wide range of other names — perhaps seminal Silicon Valley entrepreneur Bill Joy, as Kleiner Perkin’s John Doerr suggested yesterday? Who else? We’ve created a poll to let readers vote. If you have another candidate in mind, leave their name in comments. We’ll probably do another poll before the administration decides on anyone.

Of course, figuring out exactly how a CTO would fit in with existing government agencies is something yet to be ironed out. Stephanie Condon, a CNET tech policy reporter (who I used to report with back in college!), has a detailed look at the CTO situation.