Cheetah Mobile‘s mobile news service News Republic is launching its Spark influencer platform as part of an effort to bring more original content to its audience.

Beijing-based Cheetah has gained more than 612 million users around the globe for its mobile utility apps, and its New Republic mobile app is one of its expansion efforts in the West. News Republic, a news story aggregator that has more than 30 million users, was acquired by Cheetah in August for $57 million. 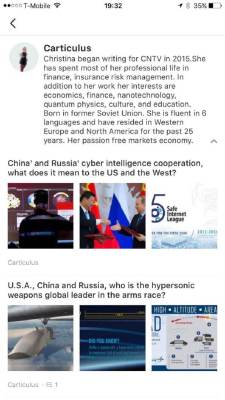 Above: News Republic is targeting Spark at micro-influencers.

Now the company is adding content from influencers, popular individuals and celebrities who create videos on YouTube or write original blog posts for targeted audiences. Spark will use Cheetah’s artificial intelligence engine to recommend influencers to you based on the news feeds that you read, said Charles Fan, chief technology officer of Cheetah Mobile, in an interview with VentureBeat.

“We are providing a platform for new influencers, particularly those who have never published before,” Fan said. “We can provide a worldwide platform — 30 million users from News Republic and the larger audience for Cheetah Mobile.”

The influencer content will be personalized to your tastes, based on what kind of news you read on the New Republic app, which is available on iOS and Android. Spark leverages machine learning technology to provide relevant influencer content for users.

The launch of Spark transforms News Republic from a news app supported by top tier news outlets into a comprehensive content app with both evergreen influencer content and breaking news, Fan said.

“We position ourselves as a content distribution platform,” he said. “We help our influencers reach the right audience through personalization and AI.”

News Republic users can start receiving and subscribing to content, such as blogs and YouTube channels, from Spark members.

With the introduction of Spark, users can not only get breaking news from news providers — such as Reuters, Associated Press, Agence France-Presse, and BBC International — but also stay on top of exciting content from their favorite YouTubers and bloggers.

Content from Spark will be available across Cheetah Mobile’s suite of apps, including popular utility apps Clean Master and CM Security.

News Republic isn’t targeting the most popular influencers — such as PewDiePie, who already has a huge audience. Rather, it’s going after the long tail of “micro influencers” who are popular on particular topics or in particular regions. News Republic has already amassed more than 350 registered influencers on Spark since the launch of the beta test. These micro-influencers are often the sweet spot for brand advertisers trying to reach users, Cheetah Mobile believes.

Fan said that micro-influencer content is often welcomed as authentic and original, in comparison to the news that users already get. The initial target is English-speaking influencers in the U.S. Among the Spark influencers is Jia Jiang, a popular TED speaker. About 80 percent of Cheetah Mobile’s users are outside of China.

”For an online influencer like me, reach is everything, and having Spark as a channel for my content is simply awesome,” Jiang said in a statement. “The analytics tool tells me who my new readers are so I know what to write for them.”

About 20 percent of the current content contributions are new to the influencer space, meaning they didn’t have an established blog until they joined Spark. The platform has helped them get more exposure.

“My articles published via Spark have received more than 10,000 clicks within two weeks,” said Christina Kitova, a top-performing writer specializing in military and politics, in a statement. “It’s been fun writing topics I’m truly passionate about, while having the opportunity to share it with the right audience set. I think the AI aspect really makes the difference in helping my content get seen by readers that are truly interested in my work.”