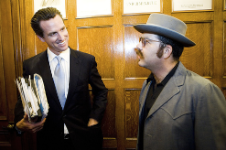 “I’m the first candidate in American history to launch a campaign for second place,” says Chicken John Rinaldi, a well-known San Francisco artist and mechanic who is contesting favored incumbent Gavin Newsome’s bid to be the next mayor of the city (see photo: Newsome on the left, Rinaldi on the right).

If it weren’t for the timely intervention of Paypal itself, however, he wouldn’t still be in the running.

His campaign, launched on a whim this summer, raised $40,000 in twenty days, he tells us — an amount that should earn him matching funds from the city.

The problem was, the city requires candidates to provide it with the physical addresses of their donors. Chicken John received donations through Paypal, which does not normally provide payment recipients with personal information such as addresses of people making payments through the service (Paypal’s policy here).

Fortunately for Rinaldi, Paypal went out of its way to provide the city’s Ethics Commission with this information, the company tells us.

Rinaldi is currently waiting for final approval from the city, along with the matching funds owed him.

He is perhaps best known in the tech world for building a pickup truck that runs completely on coffee grounds, that has recently been on display at local cleantech conferences, Foo Camp, Burning Man and other geek-frequented events. 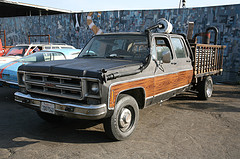 His campaign platform, like his truck (pictured), is a fusion of art and technology. He’d like to get at least one city bus also running on coffee grounds. He’d like to see low-income neighborhoods such as Bayview and Hunter’s Point get better internet access to aid in education; he’d like to see more used computers redistributed to poor people in the city. He’d like to see the city bureaucracy become more streamlined — online permits and such, with artists and inventors getting more leeway to build fuel-efficient cars, large works of art, and all manner of daring machines.

The former punk circus owner would like to San Francisco become “a world-class city of art, which it’s most definitely not right now.” You can read more on Chicken John’s platform here.

Scott Beale, the owner of web hosting company Laughing Squid, blogger, geek photographer (he took the truck picture, above) and a long-time friend, set Rinaldi up with his own WordPress-powered blog and is working with him on his web campaign strategy. Beale and other volunteers also worked on Green Party candidate Matt Gonzalez’s campaign against Newsome in 2003, which came close to victory.

Lane Hartwell, a talented photojournalist at Wired (the picture at the top and the one below are both hers), has been documenting Rinaldi’s campaign on her blog and on Flickr.

The San Francisco mayoral election is on November 7th. 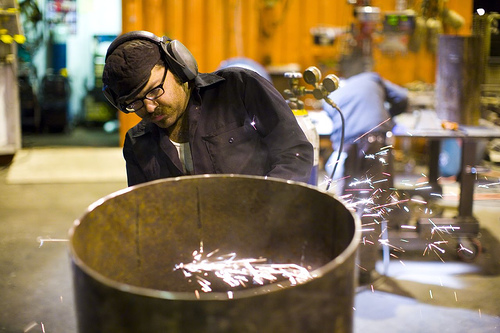