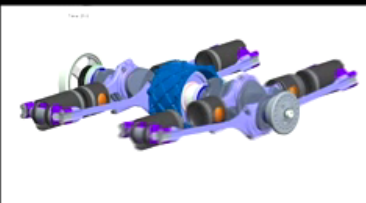 EcoMotors is poised to revolutionize cleantech engines after securing funding for the production of its Opoc engine.

The Opoc engine is EcoMotors’ clean, efficient, lightweight, and low-cost internal combustion engine. The technology, developed by EcoMotors, generates the same amount of power with half the weight and size as a conventional engine, the company says. It promises 20-50 percent better fuel economy than current state-of-the-art engines.

Consumers will benefit when these engines hit the market, improving the aesthetics and performance of cars and trucks.

“These engines take up less space in the cabin for the same amount of power, and will allow for more creative designs for the vehicle itself,” said Andrew Chung, partner at Khosla Ventures, in an interview with VentureBeat.

Zhongding Power, one of the largest automotive component conglomerates in China, will finance the $200 million and construct the first Opoc plant in the Anhui Province. The plant will have the capacity to produce 150,000 engines per year, and over $1 billion in revenue potential.

This internal combustion engine could answer a problem many consumers face: They want a high-performing vehicle for a low cost with good fuel economy, and increasing numbers of them want one that is environmentally friendly.

“Clean vehicles of the future need to be something that isn’t expensive, doesn’t cause fear in the consumers’ eyes, and you need to fuel these automobiles,” Chung said.

This internal combustion engine is less expensive than hybrid or electric vehicles, and produces 25-35 percent less carbon dioxide, EcoMotors claims. It’s based on an “opposed piston-opposed cylinder direct gas exchange operation,” according to the EcoMotors website, which, it says, provides the emission benefits of a 4-cycle engine with the simplicity and compactness of a 2-cycle engine.

The engines are set for production next year, but won’t be seen in vehicles until 2015-2016. However, consumers could start to see the engines in products like portable generators as early as next year.