China has always been a hard market to crack for non-Chinese game companies. But the regulatory approval of games imported into China has started to improve, according to market researcher Niko Partners.

That’s probably a good thing, as the country is isolated now due to the coronavirus, and its population is probably in need of some good entertainment. It’s also a good thing for foreign game companies that need access to gaming’s largest market.

In 2020, Niko Partners predicts 20 to 30 foreign games will get approval each month, on average, for a total of 240 to 360 new licenses expected this year. That compares to only 185 foreign games approved in all of 2019. Still, the primary beneficiary isn’t the U.S. It’s Japan.

Chinese law requires all digital games to receive a license from the regulator in charge of games, including a publishing number (ISBN), to be published in China. 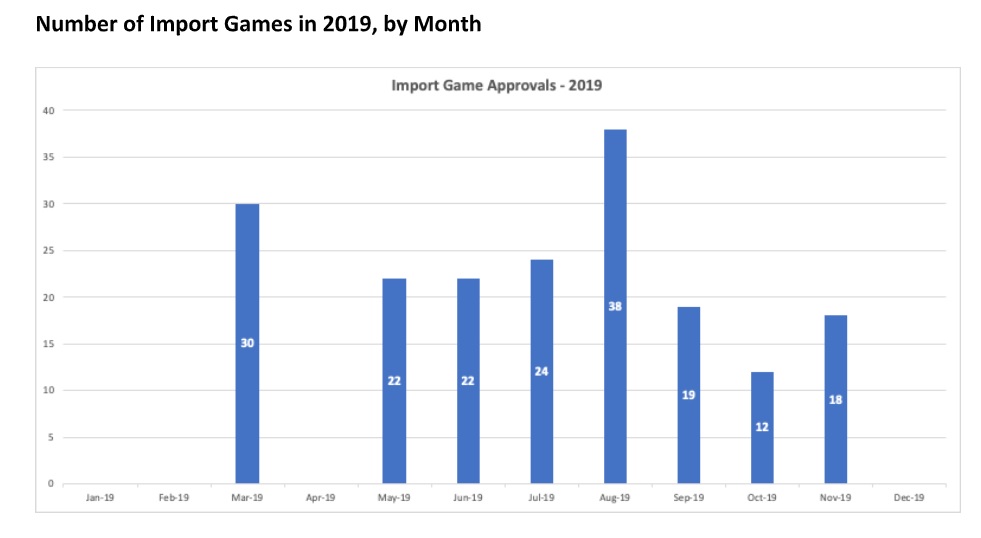 Above: China’s approval of foreign games by month.

The current regulator is the State Administration of Press and Publication (SAPP). This entity took control over digital games regulations in 2018, with considerable disruption in the game approvals process.

Over the past 20 years, Chinese developers have grown from working predominantly on outsourced art and QA services, to full game development and operations. The domestic industry for games services revenues alone is more than $33 billion per year and rising.

Despite multinationals such as Electronic Arts having a longer history of game development, far more licenses have been granted to domestically developed games than to foreign (imported) titles. Some say this is critically unfair, as most other countries allow for any game to be published and success would be determined by demand for it.

Trade debate aside, China sets its own policy, and all companies, Chinese and foreign, must comply. The primary reason for the licensing requirement is to restrict game content, limiting it to only what is permissible and denying games with content deemed dangerous or inappropriate. Rules include restrictions on depictions of blood, gore, certain geographical maps, use of language, and much more. All companies need to submit to the licensing process for games they hope to publish in China, and only Chinese majority-owned companies are allowed to submit to that process.

Niko Partners has tracked games licenses in China since 2009. The company aggregates data on the
country of origin, genre, developer, domestic publisher, platform, and more. The data, which is based on official data published by the Chinese government, shows that the peak year for games licenses was 2017.

Until June 2016, mobile games did not need a license prior to publication, and until 2014 sales of consoles and their games had been banned in China (thus those games would not have applied for a license). From June 2016, all three platforms — console, PC and mobile games — had to be licensed prior to publication, and data for 2017 reflects that volume. Because regulatory changes increased
approval volume for 2017, we will never hit that peak again, Niko said. 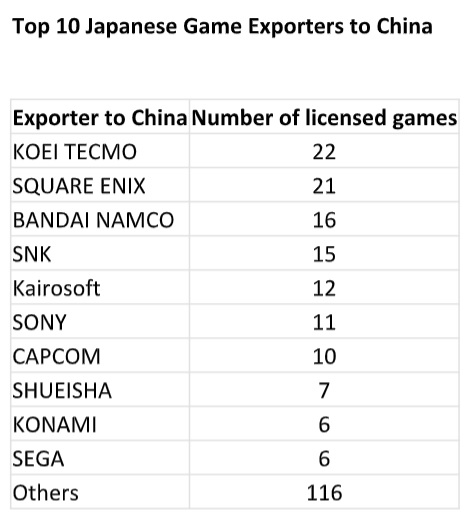 Above: China’s approval of Japanese games.

In 2018, there was a changeover in regulators and this resulted in a nine-month ban in games licensing. Few games were licensed in 2018 because that process was open only three months of the year. In 2019 licensing resumed, but a trade war also erupted between the United States and China.

Digital games were not explicitly part of the U.S.-China trade war, but there is a possibility economic tensions have been a factor in the decline. Coincidentally, China licensed fewer games from the U.S. in 2019, including several global hits such as Fortnite. One more political consideration is that games from South Korea have not received a license since early 2017, without stated reason.

Usually, when China offers no official stated reason, the issue is political. That may explain why PUBG, a global phenomenon from South Korea, didn’t get a license in China. But China did approve a similar domestic title by Tencent called Peacekeeper Elite. 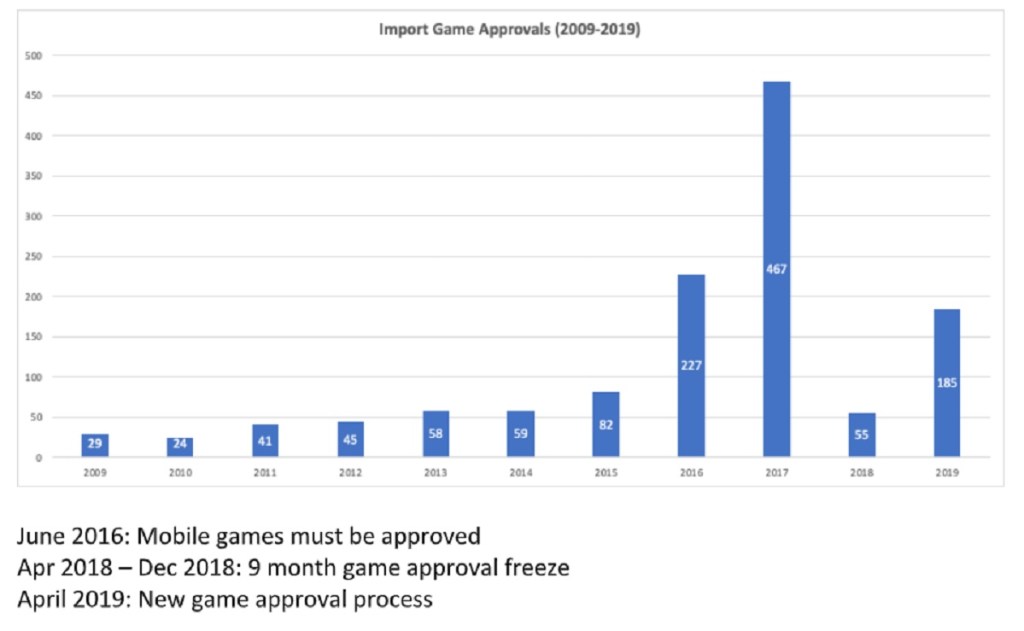 However, in 2019 Japan got 63. Notably, 1,385 domestic games received licenses in 2019 — nearly eight times the number of foreign titles. In 2019, China declared it would stop licensing low-quality and copycat games, which comprised many of the licenses in the years before the hiatus, so Niko expects that 2017 will maintain its status as the peak year.

As noted above, Niko Partners predicts many more foreign games will be approved this year. Importantly, the ratio of licenses of import games does not align with the ratio of revenue generated by foreign games — the revenue ratio is much higher.

For example, foreign PC games accounted for 60% of games revenue in 2018, but far less than 60% of the games commercially available or newly licensed. It is also important to note that Steam’s international version is a popular platform for PC games and is currently unblocked in China.

Foreign game developers are currently able to launch games on the platform, without needing to go through the approval process, to reach Chinese gamers. Steam’s China version is coming in the future, which would require games to be fully licensed prior to launch, with 40 titles announced for the launch. The point is, the Chinese spend a lot on unlicensed games, despite the rigid system.

Under China’s revised policies announced in April 2019, there is a limit on the number of games that are approved each month. China also cracked down on certain genres such as poker and mahjong games, and the halt of licenses for low quality and copycat games. This is the main reason Niko foresees lower license numbers in 2020 and beyond, at least compared to 2017.

Above: China’s approval of South Korean games has dropped off a cliff.

Japan is the No. 1 country for China’s imported game titles. Japan accounted for a third of all imports in 2019. While Japanese-developed titles also led import games in 2017, 2019 was the year of Japan’s biggest lead.

This is due both to a decline in the number of approvals for other historical top countries like the U.S. and Korea, and an overall broader set of countries receiving game approvals.

Kairosoft was the leading Japanese company exporting games to China, with eight of its titles receiving licenses, followed by SNK, Capcom, and Square Enix with four titles each.

Hit Japanese themes were popular anime games, such as Hunter x Hunter, Naruto: New Generation and My Hero Academia. Others were popular original intellectual property from Japanese developers such as Pro Evolution Soccer Mobile from Konami (PES has long been a hit franchise in China) and Romance of the Three Kingdoms (ROTK) from Koei Tecmo.

The approval of Nintendo Switch hardware for Chinese distribution by Tencent also led to the first Nintendo game license. We expect Japanese imports to continue to dominate in 2020, especially as Nintendo has confirmed that it plans to submit eight first-party titles for licensing.

The majority of U.S. games licensed in 2019 were in casual and midcore genres such as Sports, Racing, Simulation, and Strategy. Core games such as Call of Duty Mobile, H1Z1, and Fortnite have yet to be approved. Fortnite is an interesting case as the title was submitted for approval in early 2018 and started an open test later that year in July, yet the game still hasn’t received approval for monetization.

One concern is that China is not licensing the big core hit titles that are coming from the U.S. The reasons remain unclear.

South Korea ranks as No. 3 in approvals in China, with a total of 158 titles exported to China over the past 11 years. But no South Korean games were approved in 2017 and 2018.

South Korea’s big hits include Lineage 2: Revolution and PUBG, but these haven’t been approved. South Korean hits Dungeon and Fighter and Crossfire are still very popular in China, and have been for many years.

According to the Korea Creative Content Agency, China accounted for 60.5% of Korean game exports in 2017, showing how important the market is to Korean firms. This number dropped to 30% in 2018 as Korean game developers found success in other markets, but also due to the fact zero new Korean games have been approved for release in China for the past two years.

One theory about why game approvals have ceased is due to political issues between China and South Korea in 2017, after which Chinese unofficially blocked Korean entertainment imports from entering China including games, TV shows, and music products. Relations between the two countries began to improve in 2019, and China’s Ministry of Culture and Tourism recently allowed two Korean dramas to be broadcast in the country. Despite this strengthening of relations recently, the lack of approvals has taken a toll on South Korean companies that have been unable to launch games in China.

This has notably had a large impact on China’s Tencent, which was unable to launch Lineage II: Revolution and PUBG/PUBG Mobile due to lack of monetization approval. Tencent had to go as far as removing PUBG Mobile from the app store and launching its own self-developed battle royale game (Peacekeeper Elite), which was able to receive a license for monetization.

Although Tencent has stated that it intends to publish Korean-developed DnF Mobile in 2020, China hasn’t issued an official ban on South Korean games nor announced when more Korean games will be granted licenses in China.

All games published in China must be operated by a Chinese majority-owned company, according to China law designed to protect the domestic telecom infrastructure. Among local publisher/operators, Tencent and NetEase are the leading importers, with 17 titles each in 2019.

By genre, role-playing games, puzzle games, and simulation games received the most approvals. These figures reflect titles most popular among mobile games, which reflects the continued significance of mobile titles for the import market. This corresponds also to a decrease in relative number of casual and shooter titles imported before the freeze.

Seventeen percent of import games in 2019 were imported IPs that were then developed domestically. This is a higher percentage of import IPs than in the pre-hiatus era and suggests growing confidence in Chinese game development and the importance of IP in the games market.

In 2020 Niko projects a run rate of 20 to 30 import titles to be approved each month. Trade resolutions in early 2020 suggest we may see a warming of U.S.-China trade relations, and this could produce an increase in U.S. game approvals. Niko expect that Japan will continue to lead the approvals list in 2020, carried by popular IP and a strong relationship between Tencent and Nintendo.