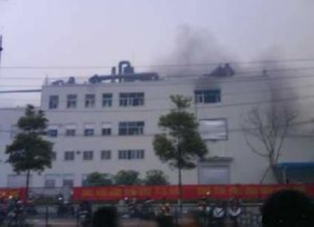 According to multiple sources, an explosion occurred earlier today at the Foxconn factory in Chengdu, China. The factory is one of Apple’s leading manufacturing plants.

Two people were killed in the explosion and 16 injured, all of whom were Foxconn employees. More than ten fire engines, ambulances, and police cars were at the scene. It took place in the A5 building of the factory, which supposedly operates as a “polishing plant” for the production of Apple’s iPad 2.

The extent of the damage is still unclear, but supply analysts say it will most probably have an effect on the production of the iPad, which has been in a short supply of late. The factory has suspended production until an investigation is completed.

In a statement, Foxconn said it is “working with medical officials to provide treatment to the injured employees and we are working with government and law enforcement officials to contact the families of all employees affected by this tragedy.” It added that the cause of the explosion was being investigated by the local police.

After 10 employees committed suicide last year in Foxconn’s Shenzen division, the factory and Apple have been under scrutiny for their treatment of workers and for supposedly allowing “sweatshop-like conditions.” In response, Apple conducted internal investigations and said it was working to “ensure that conditions throughout our supply chain are safe and workers are treated with respect and dignity.”