Rumors of the Apple iPad surfaced so long ago that a Chinese company was able to “pre-emptively clone” Apple’s device. Now, the Chinese company says it may sue Apple for copying its design.

That’s putting the shoe on the other foot. Apple is normally credited with being the most innovative tech company, and lots of rivals clone its designs. But Wu Xiaolong, president of Shenzhen Great Loong Brother Industrial Co., is fuming that the iPad (pictured below) allegedly replicates the design of his company’s multitouch tablet, the P88 (pictured at top). 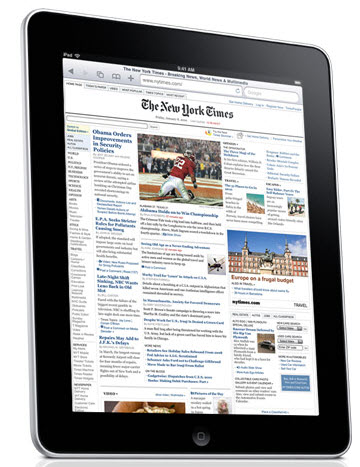 “I was very angry and flabbergasted when I saw the news of the iPad presentation two days ago,” Wu told a Spanish publication, El Mundo. “It is certainly our design. They’ve stolen because we presented our P88 to everyone six months ago at the IFA (International Electronics Fair in Berlin).”

Of course, we can see some obvious differences here. The P88 runs Windows and is much thicker than the iPad, for instance.

Apple hasn’t commented yet. Wu said that if Apple launches the iPad in China, his company will sue. Japan’s Fujitsu is also contemplating suing Apple because it had a product in 2002 that it called the iPad.