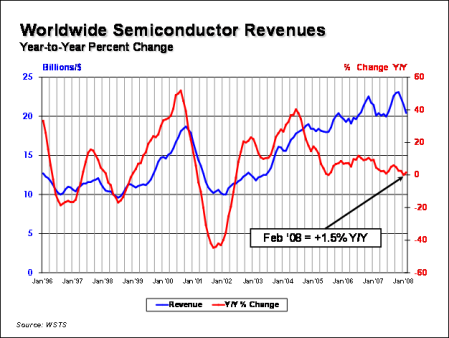 Still, the decline isn’t nearly as bad as it was in 2001, when sales plummeted 30 percent, largely because there isn’t a huge overhang of chip inventory. Back then, the Y2K bug spurred demand for PC sales, and the dotcom frenzy drove chip makers to overproduce. Since then, chip makers and their customers alike have had more control over inventory. Sales growth is expected to resume in 2010 with the industry growing 7.4 percent to $264.9 billion and 7.5 percent in 2011 to $284.7 billion.

“We are in an unprecedented era and lack the visibility we might normally have,” said George Scalise, president of the SIA. “Looking back is not a good way to see where we are headed.”

The SIA forecast is notoriously inaccurate, but it is grounded in actual sales reports and closely watched. The chip industry is considered the bellwether for the tech economy because chips are the foundation for all electronic goods.

Scalise said the holiday season is particularly unpredictable. He noted that consumer demand remains the major driver of chip sales, due to the large amount of chips used in consumer goods such as cell phones and PCs, which together account for 60 percent of all chips sold. Digital cameras and music players remain strong segments as well. Corporate technology spending is expected to fall in 2009.

The SIA predicts that cell phone unit demand will fall 6.4 percent and PC unit sales will fall 5 percent in 2009. Cell phones are expected to grow 8 percent in units sales in 2008, while PCs are expected to grow 10 percent this year. Overall, chip sales were strong through the first three quarters of 2008. Since 2001, the chip industry has had six years of uninterrupted growth.

Scalise said the forecast projects growth in all regional markets through 2011. The Asia-Pacific region will grow fastest, from 50.7 percent of all chip sales in 2008 to 52.9 percent in 2011. From 2008 to 2011, the compound annual growth rate is expected to be 2.9 percent. Dynamic random access memory chips will grow 5.2 percent CAGR in dollars through 2011 while microprocessors will grow 3.5 percent. Optoelectronics, such as light-emitting diodes, will grow 8 percent.

Scalise said he hopes the Obama administration will make economic stimulus a top priority. The SIA favors tax incentives to enhance liquidity and investment in capital spending in the U.S., and incentives for hiring and retraining of workers. It also supports an increase in funding for basic science at universities and in government research, as well as green energy incentives and stimulus spending on infrastructure for the information economy.