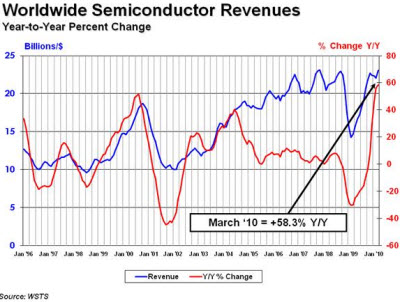 The worldwide semiconductor industry continued a broad recovery in March as sales came in at $23.1 billion, up 58.3 percent from a year ago and 4.6 percent from February.

The chip industry trade group, the Semiconductor Industry Association, said that the first quarter of last year marked the low point in semiconductor sales during the global recession and that a recovery has been boosting sales ever since. For the first quarter of 2010, sales were $69.2 billion, compared to $43.7 billion a year earlier. (All monthly sales numbers represent a three-month moving average, a mathematical smoothing technique).

“Global sales of semiconductors set a new high for the month of March and were second only to the record sales reported in November 2007,” said SIA President George Scalise. “Healthy demand from major end markets coupled with restocking to normal inventory levels contributed to strong first-quarter growth. While we expect that 2010 sales will continue to be strong, the year-on-year growth rate will moderate going forward, reflecting the industry recovery that began in the second half of 2009.”

Scalise said that industry contract manufacturers as well as chip design companies that have their own chip factories are expanding production to bring supply in line with demand. The association is not worried about excess inventories or excess capacity that could initiate a downturn, due to strong demand. Computing and communications, which account for more than 60 percent of total chip demand, are showing healthy unit sales increases. PCs are expected to grow in the mid-to-high teens in unit sales, while cell phones are expected to grow in high single-digit percentages.

The sales have increased in a variety of market segments, including enterprise sales, where the recovery has been slower than in the consumer market. The Chinese market helped spur growth. Overall, the SIA expects double-digit percentage growth in revenues in 2010.