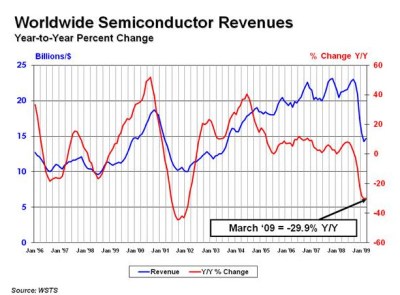 Global chip sales for March rose 3.3 percent from February, a slight improvement that will be viewed as welcome news in the bellwether chip industry, according to the industry trade group.

Sales were $14.7 billion in March, up from $14.2 billion in February but still down 29.9 percent from $20.9 billion a year ago, according to the Semiconductor Industry Association.

Chip sales are a leading indicator of the health of the tech economy. If sales bounce back on a month-to-month basis, it could be, as Intel chief executive Paul Otellini said about the first quarter, a sign that the industry has hit bottom in the severe recession.

Sales for the first quarter were $44 billion, down 30 percent from $62.8 billion a year ago and down 15.7 percent from the fourth quarter sales of $52.2 billion. That was a reflection of the global economic slowdown.

Sales in all regions except Japan showed month-to month sales gains. Japan was slow because of a big drop in the overall economy. George Scalise, president of the SIA, said that the modest rebound in March showed demand has stabilized somewhat. All major product sectors showed month-on-month growth, with bright spots such as smart phones and netbooks. Still, Scalise said visibility is limited and there are no clear signs of firming of demand in major markets such as consumer electronics, automotive and corporate information technology spending.