Bill Watkins was uncharacteristically quiet when he parted from storage giant Seagate as the company laid off hundreds of employees. But the tough-talking former chief executive didn’t stay down for long, and now he’s talking about what he’s been doing since January.

Today, he emerged as a board member and promoter for Vertical Circuits, a startup in Scotts Valley, Calif., that has a new twist on stacking chips vertically. The new stacking technique will likely lead to electronics that are smaller, faster, and cheaper — like a mobile phone that can hold an unlimited number of music videos — because it has anywhere from 16 to 24 flash memory chips stacked in a very narrow space. 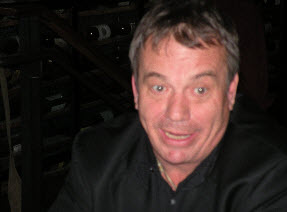 Watkins (pictured) said in a phone call that storage was in his blood and he really got into the storage startup scene while at Seagate.

“In the past, everyone just kept putting more and more gigabytes into a storage product,” Watkins said. “But the customers started coming back to us and saying they wanted the product to be really thin.”

Vertical Circuits chief executive Sunil Kaul said the company has been working on a fresh idea to stack chips for the past three years. Typically, companies such as Matrix Semiconductor (now part of SanDisk) have tried to stack chips in three dimensions by re-designing them. Others would simply stack finished chips on top of each other, but the metal wires that connect the chip circuits to the rest of a computer system are always a big problem.

Vertical Circuits gets around this by using an epoxy that glues the chips together without making any changes to them. The epoxy is also conductive, so that one chip can be electrically connected to the one above or below it through the glue that holds them together. The big batch of wires isn’t necessary, and the metal connections that remain can be done with silver, rather than gold. Hence, it’s much cheaper to connect, and Kaul said this method of packaging could save chip makers 15 percent compared to alternative methods. 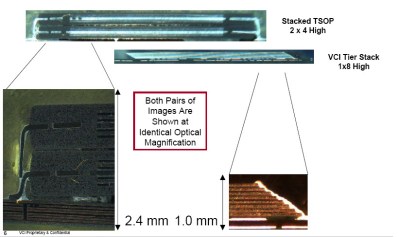 The good thing is that while other methods can’t stack more than four or eight chips on top of each other, there’s no limit to how many Vertical Circuits can stack, Kaul said. The company has demonstrated that it can stack eight, 16 or 24 chips. Dissipating heat from chips that are stacked on top of each other is still a problem. So Vertical Circuits can’t do this with microprocessors that throw off too much heat. But it works fine with flash memory chips.

Vertical Circuits tried to make its own chips at first but discovered that was too costly. Right now, it is licensing its technology to others. Shinko Electric Industries, a multibillion-dollar chip packager, has licensed the technology, as have four or five other unnamed companies.

By the second half of the year, products using the technology should hit the market. The stacked chips are likely to be used in products where low-power and space are at a premium. That includes memory cards, cell phones, music players and other small gadgets.

The company has 30 employees and has raised “double digit millions” in financing from European investor Friedli Corporate Finance. But the company is seeking to raise a new round from strategic investors now.

That’s where Watkins, who has also joined the boards of Flextronics and Maxim Integrated Products, can help. Watkins said one of the fun parts of his job at Seagate was finding storage startups. There are a dozen or more that are trying to create better flash chips that can serve as hard-drive replacements, he said. Watkins said he was also excited about solar startups and has been personally funding them.

Asked why he left Seagate (many reports said he was fired), Watkins said “I can’t talk since I don’t have my money,” a reference to legal discussions related to severance that usually take place after a CEO leaves. He added, “Guys like me always push the envelope. I pushed the envelope in a lot of ways.”

Watkins was one of the most colorful executives in Silicon Valley, to put it mildly. He was candid about making mistakes and didn’t mind swearing in interviews. As one writer remarked, that kind of style probably didn’t work so well once the company hit hard times.

“I’m not upset,” he said. “I have respect for a lot of people on the board. Steve (Luczo, who replaced Watkins) will do what needs to be done in the short term. I was not a CEO. I was Bill Watkins trying to be a CEO. I’m glad I stayed true to me. I’m happy to get back with people who are passionate about what they do. I spent so much time with people who just wanted to make money.”