Samsung Electronics has quietly built a $4 billion business providing chips that serve as the brains of consumer electronics gadgets. Among its big wins are the iPods, iPhones, and portable navigation devices such as the Dash Express.

But it’s starting to talk more now. The company says its System LSI division within Samsung Semiconductor is targeting the fast-growing digital photo frame and mobile Internet device markets as well. Those markets are expected to hit tens of millions in the coming years, according to market analysts such as International Data Corp. and TSR.

But this sudden chattiness isn’t a surprise. The competition is heating up in this space. Intel has launched the Atom microprocessor to serve as the brains of MIDs, which are broadband-connected handhelds with sizable screens and general-purpose computing power. Nvidia has also launched a chip, the APX 2500, aimed at delivering superb graphics on a MID or smart phone.

Both Intel and Nvidia want to take the power of their PC chips and bring them down into the mobile space, while Samsung is defending its turf in handhelds and phones with power-efficient processors based on the ARM architecture. It’s a classic collision, where one side is moving from the high end to the low and the other moving up from the low end. Another reason for Samsung to worry is that Apple recently bought PA Semi, a microprocessor maker. It isn’t clear what Apple could do with it. But conceivably it might make its own ARM-based chips and cut Samsung out of the picture. Interestingly, Nvidia bought PortalPlayer just as it was losing the iPod business to Samsung. Now PortalPlayer’s assets are enabling Nvidia to get into the MID/smart phone markets. 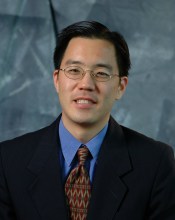 South Korea-based Samsung is better known in chips as a memory supplier. Samsung is a little bit at a disadvantage since Apple doesn’t let its suppliers talk about their business with Apple. The company’s application processors have gone through several generations of the ARM architecture since 2002. A next-generation chip based on the ARM Cortex A8 core isn’t that far away, said Richard Yeh, director of marketing for the System LSI division of Samsung. The Cortex cores can run at speeds greater than 667 megahertz, not bad for an extremely low-power chip.

The application processors are families of chips that stuff everything you need into one chip: multimedia, mobile TV, 3-D graphics, communications, imaging, and basic interface controls. Samsung says it has a 60 percent share of the market for application processors in portable navigation devices. Those devices are moving on to 3-D maps and landmarks, requiring a leap in processing power.

In digital photo frames, Samsung has had a later start. But those devices too are being infused with wireless Internet connectivity and video capabilities. As such, they require beefier processors. Intel has been loudly trumpeting the MID market all year, though one of the requirements is ubiquitous wireless broadband. That’s not really happening until new technologies such as WiMax are adopted.

It will be interesting to see how the chip competition unfolds. Texas Instruments is also in the race. But here’s a clue from Yeh. He says that companies that offer a one-size-fits-all chip (i.e. Intel) aren’t likely to succeed in markets where customization is king. Moreover, Intel won’t have a cell-phone Atom chip until next year. That gives Samsung plenty of breathing room for now.