Christmas Day traffic in the U.S. to the largest online retailers — including Amazon, Walmart, and Target — increased by 27 percent over 2011, according to new data from Experian.

“Christmas Day 2012 saw a 27 percent increase in online traffic to the top 500 retail sites compared to 2011,” wrote Matt Tathan, the director of public relations at Experian, in a blog post. “The top retail sites received more than 115.5 million total U.S. visits. To date the holiday online traffic for the past seven weeks to retail sites are up 10 percent for 2012 vs. 2011.” 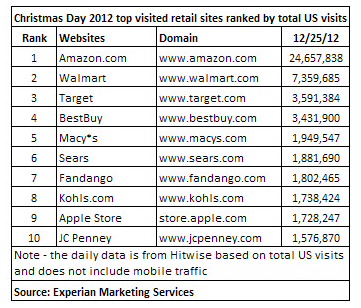 Experian notes that Christmas Day saw the highest increase so far in U.S. online traffic for holiday milestones with a 27 percent bump. Cyber Monday had an 11 percent jump, Black Friday was up 7 percent, and Thansgiving was up 6 percent. The day after Christmas has not yet been counted. The graph below lays it out: 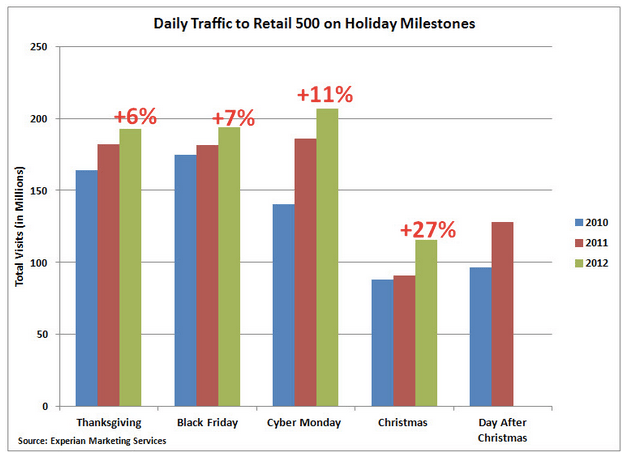 Other notable data points from Experian’s research include:

• Gift card searches increased 6 percent in 2012 vs. 2011 and the top gift cards searches this past week were for Visa, iTunes and Amazon.