Were the Surface and Kindle Fire more popular gifts than the iPad? Sure looks that way.

Advertising and analytics company Chitika just released its latest Christmas web traffic report, and it comes with both obvious and surprising findings: Not only did Apple dominate 54 percent of smartphone web traffic, but its share actually increased —  by nearly two percent this time around.

Chitika’s numbers suggest something slightly different for Apple’s tablets. Compared to Amazon and Microsoft, which saw gains of .6 and .5 percent, respectively, Apple’s marketshare dipped by 1.3 percent. 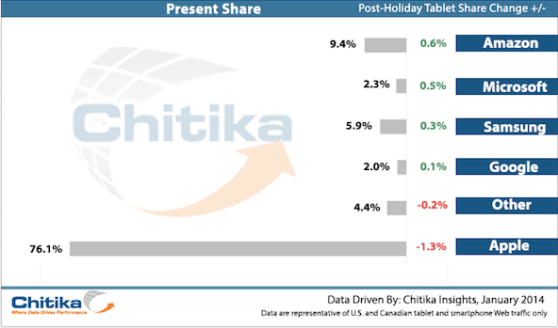 Above: All the major tablet makers saw web traffic gains — except Apple.

That’s not a number that’s particularly bad for Apple — it still commands 76.1 percent of the tablet market, after all — but it is proof that consumers are increasingly looking elsewhere to fill their tablet needs — at least when they’re buying for others.

“[This] could be partially due to the tablet’s higher price point, directing people to other manufacturers for the purposes of gift giving,” Chitika speculates.

In other words, when people buy tablets for others, they tend to go for the cheaper options. (The new iPad Air runs for $500, while the Surface 2 and Kindle Fire HDX 8.9 cost $450 and $380, respectively.)

The data, taken from hundreds of million of devices from Dec. 20 through 29, paint a particularly promising picture for Microsoft’s Surface, which generated even more traffic than Google’s Nexus tablets.

It’s worth pointing out that Chitika reported roughly the same results at this exact time last year. iPad marketshare was down 7 percent, while Amazon, Samsung, and Microsoft all made modest gains.

Again, all of these results are preliminary, but it’s clear that we’re going to be seeing a lot more interesting fluctuations in the tablet market compared to its comparatively mature smartphone counterpart.