The first change you’ll notice in version 40.0.2214.61 is the implementation of Google’s Material Design mantra. As we noted when Google revamped its main iOS app last month, it doesn’t feel quite as good as on Android, but the new look does carry over to Apple’s mobile platform surprisingly well. 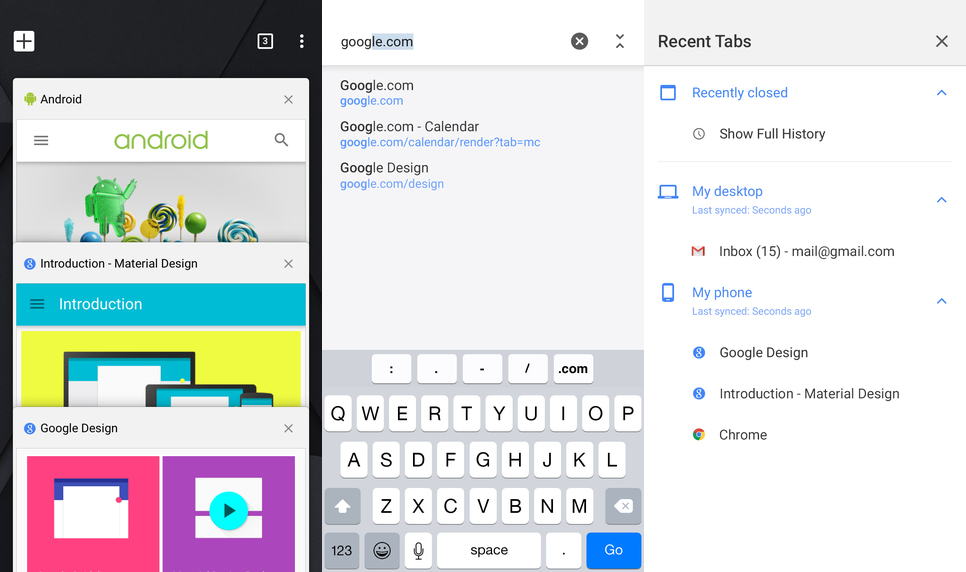 In this case, Google describes the new Chrome design as featuring “bold graphics, fluid motion, and tactile surfaces.” We’ve included screenshots of the new app on both iPhone (above) and iPad (below), but you’ll need to use the browser to get a feel for it.

Next up, Chrome for iOS now supports Handoff, which allows users to start a task on one device and swap to another one nearby. OS X Yosemite and iOS 8 are required, and in this case Google is supporting going from Chrome on your iPhone or iPad to your default browser on your Mac. It’s not clear if there are any other limitations beyond that.

Finally, in addition to the usual “stability improvements and bug fixes” note that is listed for every changelog, Google says this update includes iOS 8 optimizations and support for bigger phones. iOS 8 support arrived in September and support for iPhone 6 and iPhone 6 Plus displays was implemented in October, so these aren’t new additions — Google has just improved both, so you may see some minor tweaks here and there, but don’t expect anything major.

In November, Google shared that Chrome for mobile has some 400 million active users. The breakdown for Android versus iOS isn’t known, though it’s safe to say Chrome’s use on the latter is not insignificant.

Update: While we didn’t notice a difference in the logo, at least one user says it has gotten a minor tweak.