Google last week released Chrome 42 for Windows, Mac, Linux, and Android. The biggest addition is undoubtedly native push notifications, which can be sent to users even after Chrome has been closed, as long as the user first grants explicit permission.

Today, Google has revealed that early adopters have already signed on to leverage the feature in Chrome for desktop and Android. These include Beyond the Rack, eBay, Facebook, Pinterest, Product Hunt, SI.com’s Fansided, and Vice News. Furthermore, Roost and Mobify have started letting developers integrate web-based push notifications into their sites. 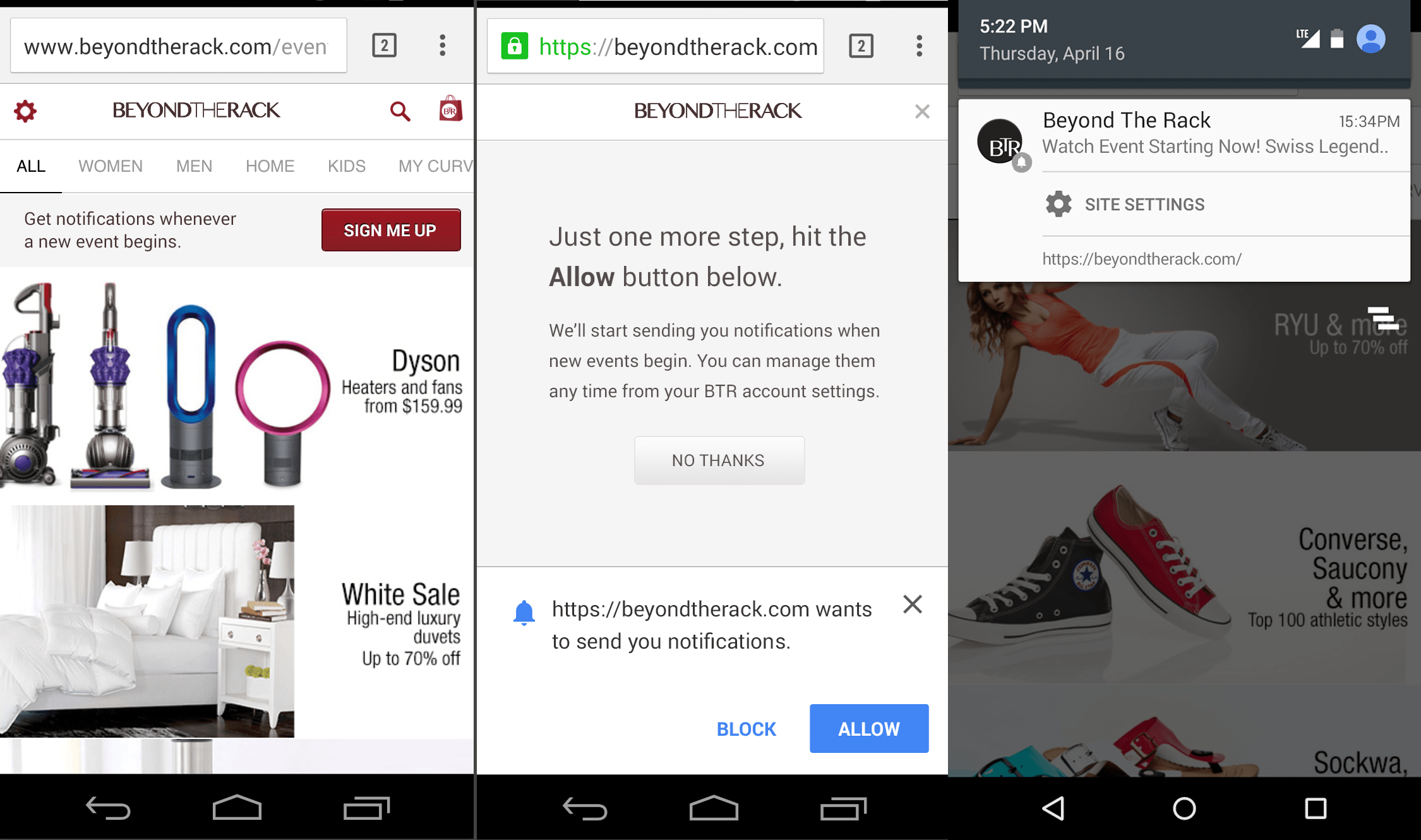 Google believes that as long as notifications are timely and personalized, they can save users the time and effort of manually checking for updates from a mobile site, just like from a native app. Bringing push notifications to the web will bridge the gap between apps and sites, the company hopes:

With low friction access to content, the mobile web provides a great discovery experience for users and unparalleled reach for developers. Unfortunately, once users discover an experience they love, it is hard for them to build a deep meaningful relationship since websites lack the rich engaging capabilities of native apps such as push notifications and home screen icons.

To take advantage of these engaging mobile capabilities, some developers build native apps, but users are often reluctant to spend the time and effort required to download and install them, despite the benefits. As a result, developers have needed to decide between the engagement potential of a native app and the reach potential of the mobile web.

With Chrome 42, users can choose to receive push notifications directly from websites — no app installation required.

Alex Komoroske, ‎senior product manager at Google, emphasized the company has best practices for the feature to make sure users are prompted when it makes sense, not just when loading every website’s homepage. Technically speaking, Google can’t stop web developers from doing just that, but Komoroske said his team “will be watching” the ecosystem to see how push notifications are adopted.

He also promised push notifications use “no more battery than a normal native app would use” and are “very sensitive to performance.” This is possible because developers can use Google Cloud Messaging to remotely wake up their service worker, which in turn can run JavaScript for a short period.

In other words, nothing is running until the site sends a push notification. Google says it takes just 50ms to bring back the service worker to get the job done.

As Komoroske told VentureBeat, “The web has always been really, really good at reach,” but “it is hard to build native experiences for.” Push notifications are supposed to change that.

While Google is touting this new experience as a big win for the mobile web, it is Android-only for now. Chrome 42 for iOS also arrived last week, but it didn’t gain native push notifications due to restrictions specific to Apple’s mobile platform.

That said, Komoroske did say the company is working with other browser vendors on bringing push notifications to other platforms. Mozilla’s Firefox is the most likely to add support next. Google is also working to standardize push notifications with W3C and IETF, though when exactly that will happen is anyone’s guess.

Another feature specific to Chrome 42 for Android is “add to home screen.” While Chrome 32 introduced the ability for Android users to add home screen shortcuts to their favorite websites via a menu item, Chrome 42 takes the functionality a step further by showing a banner.

Users who frequently visit a high-quality web app will be asked if they want to add the site to their home screen with one tap: 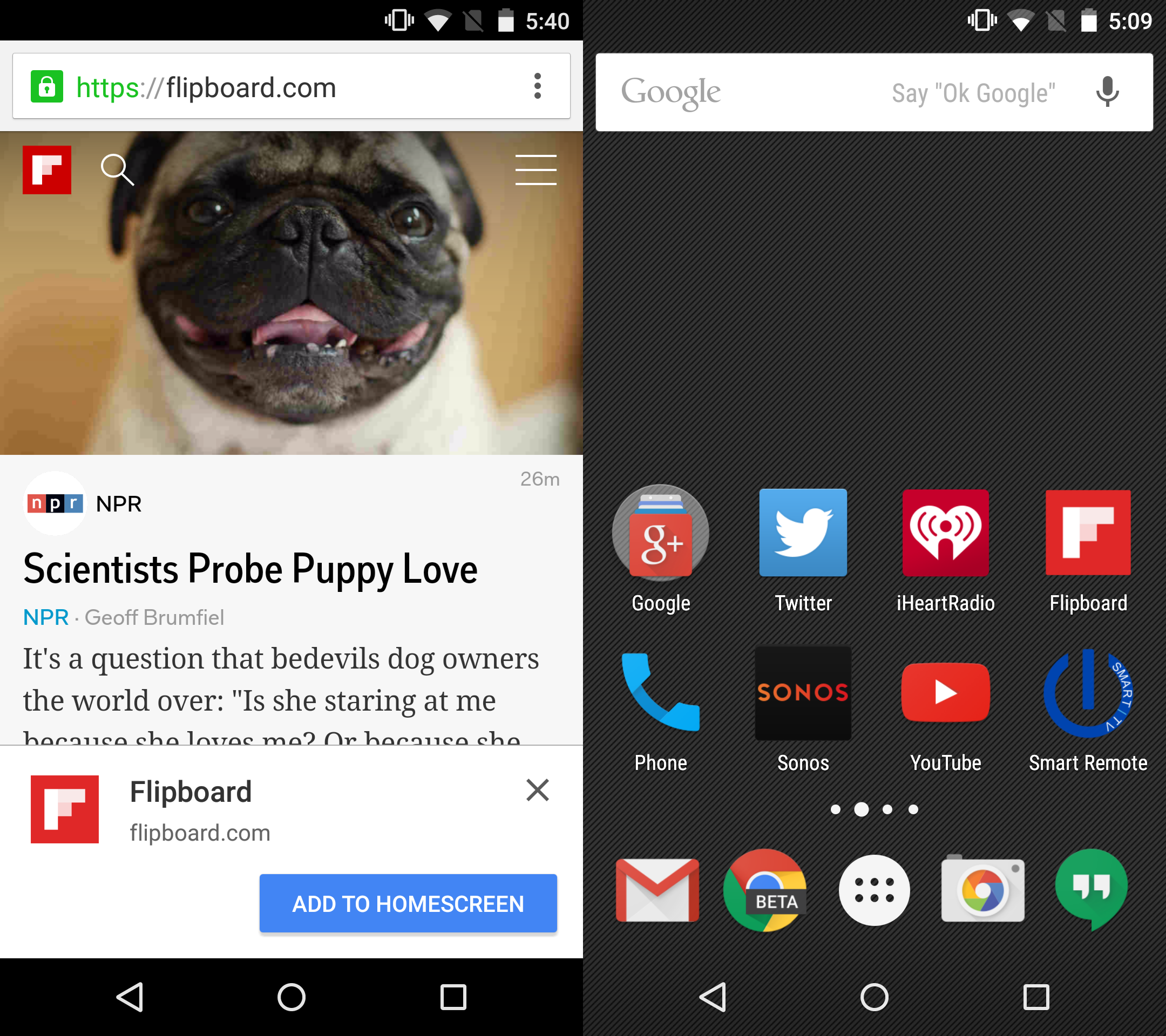 As you can see, Flipboard is already taking advantage of the feature. Home screen icons are supposed help Android users “easily jump back into their favorite experiences with just a single tap.”

Google’s goal here is clear: “diminishing the difficult choice for developers between the reach of the mobile web and the engagement of native apps.” The company wants to blur the lines between the two experiences to give both developers and users more options.