Joseph Fu is part of a team at Cisco building Spark, an enterprise messenger app that seeks to overtake the likes of  Yammer, Skype, Hipchat, and eventually, to dethrone Slack from its early leadership position. In less than two years, Slack has gone from a little-known gaming chat company to an enterprise darling valued at $3.8 billion with more than 3 million customers and several popular bots on its platform. The company has successfully attracted “kind of a cult following,” Fu said.

“Let’s be real, right? Slack is kind of a shooting star and has gotten a lot of attention because obviously people are going to have emotions around Slack … and their success story is something that’s really impossible for any other company to replicate,” said Fu, who serves as head of business development at Cisco Tropo.

Cisco won’t be easily outdone, of course. The company’s services connect more than 100 million IP phones and soft clients, and it has more than 13 million WebEx registered users already in offices and boardrooms. That’s more than a good start.

“From Spark’s perspective, we’re certainly not trying to replicate that. If anything, we want Spark to feel more like an appendage, something that you don’t really think about but is always there when you need it, rather than be this thing that you talk about all the time,” Fu said.

Cisco is working to connect Cisco hardware and software to its Cisco Spark messaging app to make Spark the center of the office Internet of Things. Bots and virtual assistants — both the kind you speak to with your voice and text bots — will be brought into meetings to make the Alexa of the boardroom.

Using sonar beacons, Spark can automatically recognize when users enter a room and trigger a virtual meeting scheduled to take place. If a single meeting attendee needs to leave early, the meeting can be transferred to their device, while people continue in the room. Emotion detection, semantic analysis, and other tools will be added to video conferences to measure how your words are being received by a client or customer. Hundreds of thousands of developers have been invited to explore Cisco APIs and invent other use cases.

“It’s those types of magical seamless experiences that we’re shooting for, not kind of the cult following,” Fu said.

If you weren’t paying close attention, you may have missed it, but Cisco clearly has big plans for its enterprise chat app.

In May 2015, Cisco acquired cloud communications company Tropo for an undisclosed amount, a move that gave Cisco access to a community of more than 200,000 developers. To put that in context, competitor Twilio currently works with about 500,000 developers.

Tropo was purchased for its APIs to make a “collaboration platform-as-a-service (CPaaS) platform” but also for its track record of building and retaining a relationship with developers, Cisco said.

“Somewhere along the way, the kind of focus on developers and being a platform got a bit lost, so we came in about a year ago to course correct there and really have a singular group within the Cisco Collaboration Technology Group team,” said Jose de Castro, CTO of APIs and integrations at Cisco.

In December 2015, Cisco Spark for Developers was created, and the company opened APIs to connect with Cisco devices and software and to allow developers to create bots.

Then the partnerships started. Since the creation of Spark for Developers, Cisco has made partnerships to reach Verizon and Apple customers. 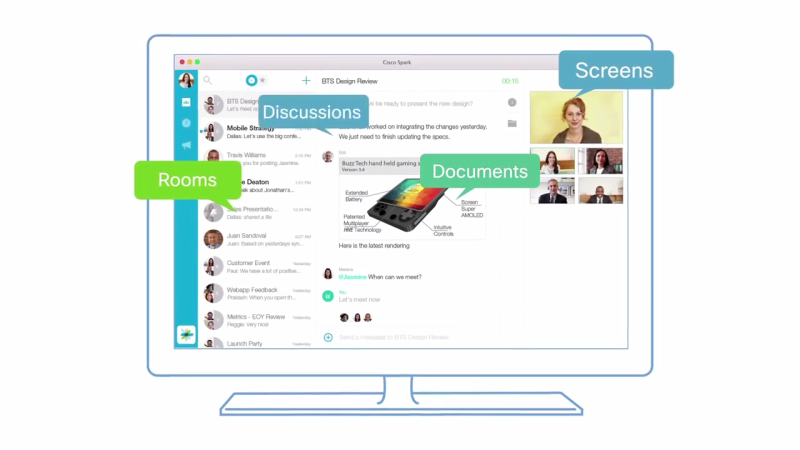 Above: The Cisco Spark interface explained

Further, the company has formed partnerships with Gupshup, built.io, and API.ai to reach tens of thousands of developers and bring hundreds of app integrations to the Spark platform. The Gupshup and API.ai platforms will let people quickly make Cisco Spark bots.

In late June, Cisco and IBM announced plans to integrate products like IBM Watson and Cisco Spark. They will begin by bringing together each other’s video and messaging clients, the companies said in a statement.

In March, the $150 million Cisco Spark Innovation Fund was announced to encourage the creation of promising bots or products that improve meetings using Cisco products.

Cisco declined to share details about the sort of equity investments the company has made in promising startups or the number of investments made.

Cisco Spark Innovation Fund is not just investing in bot creation but in “anything that makes meetings better,” Fu said.

“Bots are a key area, but it’s really just one modality in which people get work done. We’re opening up the entirety of the Spark platform, everything from the way WebEx does meeting scheduling to video experiences,” de Castro said.

Another area of focus in the near future: determining whether a Tropo integration into the Spark community will work. Cisco declined to disclose Cisco Spark’s monthly active users, the number of bots made for the platform, or the number of developers who have made the transition from Tropo to Cisco.

“We’ve kind of taken some time to make sure that we’re doing it right, but we’re actually starting to cross-pollinate the Spark for developers program with Tropo.com,” Fu said. “We’re finding that, especially with bots and a lot of the excitement around Spark for devs, it’s actually a really great time for us to start to bridge those two together.”