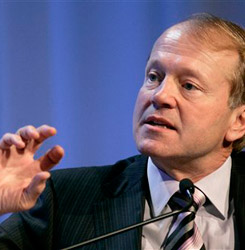 Cisco Systems is expected to cut thousands of jobs in what could be the biggest layoffs ever for the world’s largest maker of networking equipment, Reuters said.

Faced with slowing growth, Cisco chief executive John Chambers has set a goal of cutting $1 billion in costs. Analysts contacted by Reuters predicted that Cisco will lay off 4,000 workers in the coming months, or about 4 percent of its worldwide workforce of 73,000. Cisco also employs an undisclosed number of temps. The layoffs show that even in an industry upturn there are winners and losers. Cisco is the sick man of Silicon Valley.

The last time Cisco had such big layoffs was 2002, when the company had to take a multibillion-dollar write-off after the dotcom crash and cut 2,000 jobs. But the layoffs this time come as the company and the tech industry begin to pull out of the recession. Now the company can only blame its management mistakes, such as an abortive attempt to move into consumer markets.

Perhaps the silver lining is that a lot of Silicon Valley companies are doing much better than Cisco and are hiring. Cisco has already cut 550 jobs as it shut down its Flip video camera division. The company declined to comment on the coming layoffs, which are expected by the end of the summer. Cisco has had a tough time competing with a variety of rivals, from Hewlett-Packard to Juniper Networks.