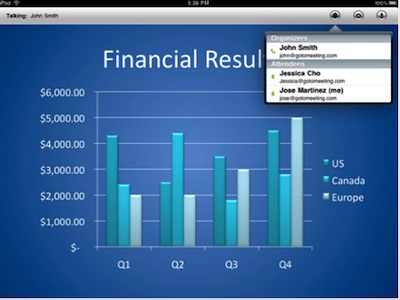 The headlines today about the opening of the iPad App Store focus mostly on media apps like Netflix, but there are cool business tools for the device, too. For example, I spend hours every week using Citrix Online’s GoToMeeting web conferencing service — and now it’s available for the iPad.

There are other web meeting options, especially since Cisco has an iPad app for its more-established WebEx service. But this is a bigger step for Citrix, because it’s the company’s first move off desktop and laptop computers, and it may lead the way for GoToMeeting on other devices like the iPhone. Citrix Chief Technology Officer Bernd Oliver Christiansen told me his company decided to make the leap to the iPad because there seemed to be a “very very high” probability that someone with an iPad would receive a Gotomeeting invite sometime while using the device.

Like the rest of the world, I don’t have an iPad, so I wasn’t able to see the app in action. Christiansen said that you’ll be able to jump into a meeting on the iPad as easily as you can on your computer, either by clicking on an emailed link or by opening the app and entering the meeting number. The goal is to give users an uncluttered screen to see the shared meeting materials. 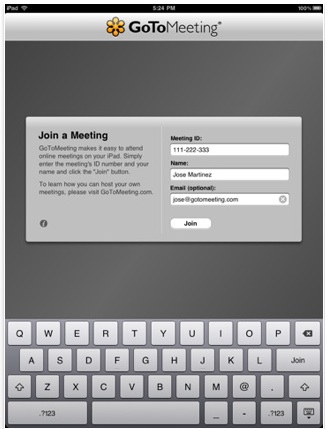 “We tried to design a piece of software that gets back that notion that paper is an awesome interface,” Christiansen said. “The most important thing is to remove any kind of user interface that would get in your way.”

Similar to the WebEx app on the iPhone and the iPad, you can only join a meeting that someone else is running, not host one for yourself. Christiansen said he’s open to adding hosting abilities later on, but for now it’s hard to predict how people will be using the iPad. He speculated that it’s more likely to be a personal device that people use occasionally for work, rather than something that you’re using to perform business tasks and store important data on.

“For a typical business user, are you going to buy an iPad to be more effective at your job? Probably not,” Christiansen said.

Following the GoToMeeting business model, the iPad application is free — users pay to host meetings, not join them. You can download it here (iTunes link), although I’m not sure there’s much point before the iPad launch on Saturday.