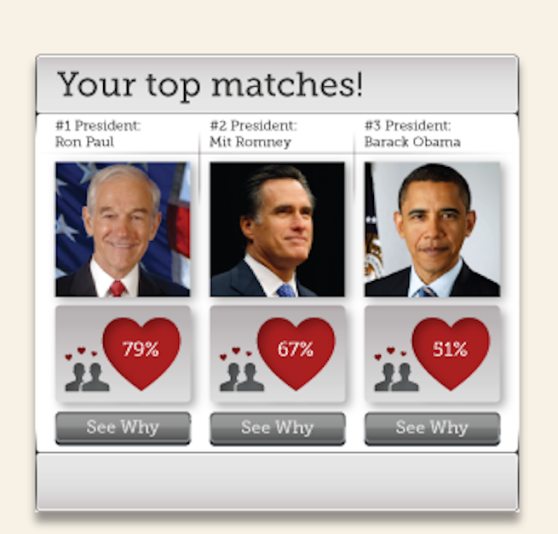 Before you vote, consider how much you actually know about where your candidate really stands on the issues.

On ElectNext, a startup launching at the DEMO conference today, you can take a free survey to discover where you stand on the political spectrum and which candidates are the closest match.

The survey has been refined over time, and approximately 2 million people in all 50 states have taken it.

ElectNext’s founders have firsthand experience on the lack of political engagement, particularly among young people. In 1972, over 50 percent of 18-to 29-year-olds went to the polls. By 2000, the figure had fallen to just 36 percent. In 2008, the Obama campaign energized the youth voter, but even then, fewer than half of 18-to-29-year-olds went to the polls, compared with more than two-thirds of people aged 65 or older, according to the U.S. Census Bureau.

ElectNext is tackling a huge problem in a fun and interesting way. Register for free by signing in with Facebook or Twitter (don’t worry — it doesn’t post your political views to your news feed). It asks you to order the issues that matter to you the most, including health care, immigration, and education. It then prompts you how strongly you agree or disagree with controversial statements. At any time, you can peruse comments and discussion threads to get a better handle on the issue.

Ultimately, the goal for the site is to increase access to information and stimulate civic engagement.

Overall ElectNext got rave reviews from onstage experts at DEMO. “I loved it,” said Flite CEO Will Price. “Everyone gets that paper and goes through each initiative and ballot, and this is a great way to frame that.”

Price did caution that he would only consider the application to be ethical if it operated as a non-profit and didn’t sell user data or get data from partisan sources.

Cisco communications executive Sheila Jordan also loved the idea. She said onstage, “I thought it would be an interesting play to make it more mobile.”

Don Dodge, Googler and startup hero, said he’d also like the founders to think about giving users updates on issues between elections, as well. “If it did that, I would love this thing” he said.

Andreessen Horowitz partner Frank Chen wrapped up the reviews calling ElectNext the most compelling presentation of the day. 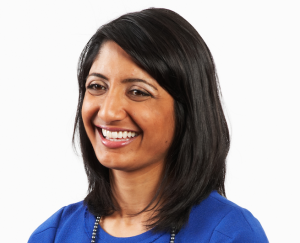 Above: Keya Dannenbaum, founder of ElectNext.

“Big data is the biggest trend in politics today. Yet all the benefit of that big data is going to industry, not individuals. We’re here to change that,” said Keya Dannenbaum, the company’s founder (pictured, left). ElectNext’s founders have developed a political database and algorithm that can match users with their ideal candidate.

Dannenbaum has experience working in politics at the national and local levels. She told me that in the three years she worked in campaigns, she observed a drop in levels of political participation and a sharp increase in the salience of the issues in people’s daily lives.

“When you ask people why they check out precisely where the issues matter most, they say it’s because it is just too hard to get good information and participate,” she said. Dannenbaum and her three cofounders want to change that.

Since its founding in 2011, ElectNext has raised $750,000 from Brooklyn Bridge Ventures, Comcast Ventures, and the John S. and James L. Knight foundation. Its founding team is in Philadelphia, New York, and San Francisco.

ElectNext is one of 75 companies and 6 student “alpha” startups by VentureBeat to launch at the DEMO Fall 2012 event taking place this week in Silicon Valley. After we make our selections, the chosen companies pay a fee to present. Our coverage of them remains objective.