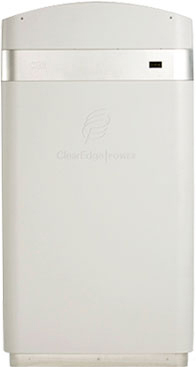 ClearEdge Power, maker of home fuel cell generators that look like big refrigerators, has brought in $11 million in equity financing, according to a filing with the SEC — adding it onto $15 million raised last August. Even though it’s been around for seven years, new interest in the green sector has given it the break it needs to expand adoption of its $50,000 device.

The Oregon companies flagship fuel cell, called the ClearEdge5, turns propane or natural gas into hydrogen, which is then turned into electrical power and heat. The heat is recirculated into water heaters and HVAC systems, so it doesn’t go to waste. Because the natural gas isn’t being burned at a power plant, the system cuts down drastically on harmful emissions and delivers about 5 kilowatts of clean energy — enough to power a home or small business.

VentureBeat highlighted ClearEdge’s $15 million fifth round of funding from Applied Ventures and Big Basin Ventures as one of the most forward-looking investments of 2009 for several reasons. Not only is it 90 percent efficient, if you count all the heat that is being repurposed, but it will also give homeowners who can’t logistically install solar panels or tap other sources of renewable energy a greener option. The only sticking point is that its price — $37,500 after government rebates — is still a tick higher than solar, which is already more costly than electricity from fossil fuel plants.

The hope is that further investment in the company, including this recent money, will be used to improve the technology and bring its price tag down, making it more feasible for middle-class consumers. For now, it has its eyes fixed on the California market, the only place the rebate is available so far. But big changes are sure to come soon, considering that ClearEdge tripled its staff in less than year and is looking to double it again.

The company’s primary competitor, Bloom Energy, which has racked up a formidable $250 million in capital, hasn’t raised capital since March of last year, bringing in $17 million from Kleiner Perkins Caufield & Byers. It is working on a 25-kilowatt fuel cell that could power even bigger buildings. It already counts Google, eBay and the San Francisco airport among its clients. Still, if ClearEdge hones in on residential customers, it might be able to carve out a nice share of the market for itself.

ClearEdge has now raised $55 million to date, some of it provided by Kohlberg Ventures as well. Whether the U.S. Department of Energy sees fuel cell technology as scalable enough to fund with grants or loan guarantees remains to be seen. But if it does, ClearEdge is almost a certain selection.