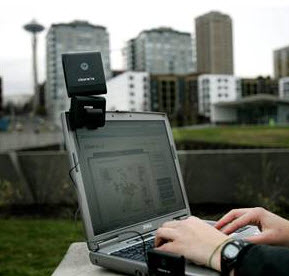 If anyplace could use high-speed wireless web access anytime, anywhere, it’s Silicon Valley. After years of waiting and building out other markets, Clearwire is finally going to launch its long-range 4G WiMax wireless Internet service in Silicon Valley.

At least part of it. Clearwire’s service will cover more than 20 square miles in the cities of Santa Clara, Mountain View, and parts of downtown Palo Alto. The service is initially aimed at software developers. That means that millions of people in San Jose, San Francisco, and other surrounding territories will have to wait — until sometime in 2010. But it’s a start. It makes sense, given how many technology-minded people are in the region.

The Kirkland, Wash.-based Clearwire is building a national WiMax network. WiMax radios function just like Wi-Fi wireless Internet radios, which get you on the web at broadband speeds. But WiMax’s range can extend for miles and the service can accommodate wireless phone calls as well as data traffic. Clearwire is spending billions across the nation and has brought the service up in places such as Portland, Ore.

Included in the initial coverage area are the headquarters campuses of Intel in Santa Clara and Google in Mountain View, two investors in Clearwire and WiMax technology supporters who are working on next-generation applications for WiMax networks dubbed 4G. Cisco’s campus in San Jose, Calif., will get coverage in coming months. If those companies are pouring billions of dollars into WiMax, it’s only fair they get first dibs.

Clearwire is working with Sprint, which is deploying the 4G WiMax network nationwide. Clearwire modems cost $49.99 a month, not counting the subscription fees that you have to pay to sprint. The developer network can expect to see download speeds up to 10 megabits per second, with average download speeds of 3 to 6 megabits per second. That’s about as fast as a phone-based digital subscriber line (DSL) broadband service.

To access the network, developers can purchase a Clearwire WiMAX USB modem for $49.99.  Developer-owned, CLEAR network-ready WiMAX devices, such as the Samsung Mondi and WiMAX-embedded Intel-based PCs, are also eligible for the program.  To qualify, developers must register for Clearwire’s developer program and describe the WiMAX development ideas they wish to pursue. Interested developers can sign-up at . The developers website will also include coverage maps and suggested drive routes for mobile application testing.