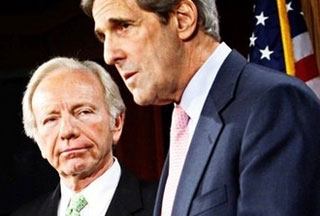 Highly-anticipated climate and energy legislation that was supposed to hit the U.S. Senate on April 26, has finally made it to the floor after several stalls and balks. A major priority for President Barack Obama, the bill would put a hard price on carbon emissions and establish a requisite credit trading system — in addition to earmarking funds for renewable and nuclear energy development.

Officially dubbed the American Power Act, and co-sponsored by Senators John Kerry (D-Mass.) and Joe Lieberman (I-Conn.), the bill has won support from the bulk of the environmentalist community and businesses that stand to profit from more stringent carbon monitoring and reporting requirements. But the opposition, including almost every Republican member of the Senate, is fierce.

There has been intense pressure on conservatives to kill the bill. South Carolina Senator Lindsey Graham went so far as to strip his name off the legislation, even though he played a major hand in authoring it. No other Republican has stepped forward to take his place so far (Maine’s Olympia Snow said no), and, as the New York Times notes, there appears to be a stronger backlash building. Even Senator John McCain, who has been a proponent of climate action in the past, is lining up against it.

The Act calls for a 17 percent reduction in greenhouse gas emissions (from 2005 levels) by 2020, 42 percent by 2030, and 83 percent by 2050. The idea is to put a price tag of $12 on each ton of carbon released by large manufacturing facilities, particularly in the automotive sector.

To mitigate price increases, the government would also offer rebates for electricity, natural gas, and heating oil. These rebates scale up for lower-income brackets.

This is exactly the kind of big-government action that the rising Tea Party movement is fighting — a trend that could cost any Republicans who support the Climate Bill their seats come primary elections. Even Democrats from industrial states, where carbon pricing could take a major toll on big businesses and employment, are afraid of being turned out of office. So far, things are looking pretty bleak for the bill.

That’s not to say that the private sector is opposed to the legislation across the board. In fact, many industries would directly benefit from carbon pricing and credit trading — including wind and solar power, the Smart Grid, and the rapidly growing energy efficiency and carbon tracking businesses.

Switching to renewable sources of energy will be one of the chief strategies to cut down on pricey carbon emissions — a boon for First Solar, SunPower, First Wind, and General Electric’s turbine division. On top of that, the legislation would require and enforce more granular reporting of emissions and energy use, generating much more demand for tracking systems and software makers like Kleiner Perkins-backed Hara, Enviance, Carbonetworks, and Picarro.

Most of these companies have been operating in hopes of legislation like this passing, arguing that revenues will spike when carbon gets a fixed price tag. It’s unclear what will happen to them if the bill falls on its face, which — without a Republican co-sponsor, and with weak support on even the left side of the aisle — doesn’t look too unlikely.