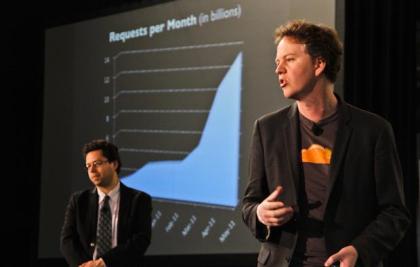 After bringing pro-level speed and security to any website, plucky startup CloudFlare is now setting its sights on web apps with CloudFlare Apps.

The new service will make it easy for site owners to install web apps without changing any code. Previously, installing web apps could slow down websites or make them less secure. Apps will also be automatically updated by Cloudflare to their most recent version, so site owners won’t be stuck running outdated apps. It’ll begin rolling out on June 1 with apps including Google Analytics, Apture, and Clicky.

Speaking on stage at the TechCrunch Disrupt conference in New York City today, Cloudflare CEO Matthew Prince showed off some impressive statistics for the startup, which has gone viral without much marketing work on the company’s part. He said that nearly 12 percent of Internet users (around 50 million unique monthly visitors) have passed through sites protected by CloudFlare’s network.

The figures aren’t too shabby for a startup that TechCrunch’s Michael Arrington described as “muffler repair for the Internet.” Cloudflare was a runner-up at the last TechCrunch Disrupt competition in San Francisco, losing out to the “information experience” startup Qwiki.

Cloudflare also announced Rocket Launcher today, a service that will let anyone speed up and protect their site in five minutes for free. The company says it was inspired by Google’s work with the SPDY protocol, which, true to its name, aims to deliver a faster web experience than the aging HTTP protocol. Rocket Launcher will even speed up third-party code on websites, like Twitter and Facebook buttons.