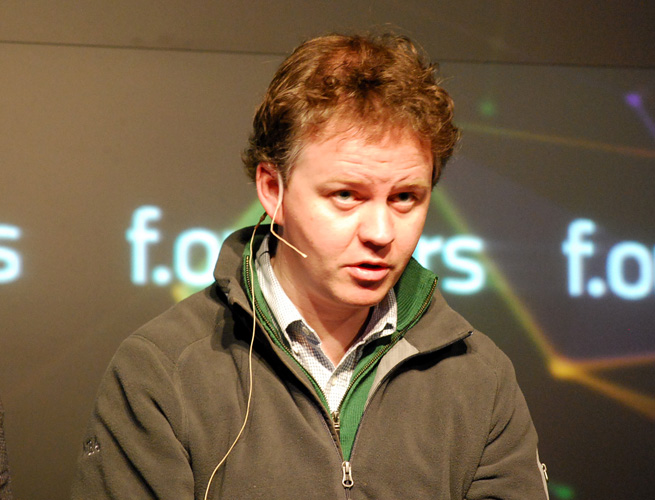 NEW YORK — It’s easy to make a lot of cheesy puns about web performance startup CloudFlare and its success — “it’s burning,” “it’s blazing,” “it’s hot,” “it’s on fire and no one can put it out.” But maybe the company deserves a little hyperbole, thanks to some surprising new stats from CloudFlare CEO Matthew Prince.

Prince said today at the F.ounders conference in New York City that the company is now signing up 3,500 new customers each day — despite the fact that it had a crippling outage two weeks ago that knocked off many sites around the web including Wikileaks, 4Chan, and some U.S. government sites.

“The [new customer] rate keeps growing and growing and growing,” he told VentureBeat after a panel with other enterprise-focused startups. “There’s lots of things we could do to juice growth. We could just email our customers and say, ‘You’ve signed up one site, do you have another one? Sign that one up too.’ We’ve never done that because our ops guys tell us if we double the rate, we’re going to have problems because we have to build capacity.”

San Francisco-based CloudFlare’s outage happened about two weeks ago after a bug in Juniper’s router software took down all of the routers in CloudFlare’s 23 data centers. The routers needed to be manually reset to bring back CloudFlare’s service and all the web sites connected to the service. CloudFlare sites were down between 20 minutes and an hour, and the company refunded money.

“It was really painful,” Prince said. “But sometimes an organization, in order to change and get better, has to experience pain.”

The irony is that CloudFlare offers web performance optimization and security for “more than a million customers,” according to Prince. If hackers try to launch a denial-of-service attack on a website, CloudFlare acts as a line of defense so the site doesn’t go down. But when CloudFlare’s entire system fails (it doesn’t happen often), all the sites using CloudFlare go dark.

While that could scare a lot of folks away, Prince says that CloudFlare lost “very few” customers and that more companies than ever are still signing up. Prince attributes the steady stream of business still coming in to two major things. First, the company was transparent about the problem and had a detailed blog post on its site in a matter of hours explaining what happened.

“It’s not the crime that kills you, it’s the cover up,” Prince said. “So we were incredibly transparent with what happened. The next few days were enormously high sign-up days. And you read the comments on the blog with people saying, ‘We trust you more.'”

Another surprising fact that makes CloudFlare’s new customer signups almost unbelievable: The company doesn’t have a sales team and has no intention of adding one now because it already takes a lot of work to build out new capacity.

“If we doubled in size tomorrow, it would still work, but if we doubled again, it wouldn’t work,” Prince said.

CloudFlare has raised about $22 million in funding to date from New Enterprise Associates, Venrock, and Pelion Venture Partners.