CoComment launched last year, giving bloggers a way to track comments about topics across Web sites — without actually having to visit each site.

The company reports growth, saying users find it useful to follow conversations from a single place: Their profile page at CoComment (see here for example).

However, it is difficult to gauge how sustainable the growth will be. More on that later.

Today, it’s launching new features. Publishers can offer CoComment on their sites, so that users don’t have to download software to see their comments. They just go the publisher’s site on CoComment to track all their conversations in one place. This saves them time from having to click back and forth on multiple pages. It’s available for WordPress, Movable Type, Drupal and other platforms — through a blog-platform plugin.

So far, like CoComment , competitors Co.mments and Commentful had offered bookmarklets for users to track their comments. Commentful has a Firefox extension, as does CoComment.

CEO Matt Colebourne told us that 15 percent of the comments tracked are now taking place by conversations taking place directly on CoComment’s site. So it has become a forum of forums. To augment this, users can now become friends, track and add to each other’s comments, and see who else is commenting on their conversations — all from within CoComment itself. Hosted comments are also now visible and searchable there.

While this all may appear of marginally of interest to some, the site’s growth suggests others yearn for ways to track their conversations. It has grown from less than 30,000 users last October to around 325,000 users now, the company says, with growth still accelerating — in part because of friends inviting others to share views. However, it is difficult to know how many are active users (returning), and how many of these users are one-timers lured by the viral invites.

Another side-effect: If a blog gets commented on in the site, a link will allow users to go to the site to read the article, thereby driving more traffic to the publisher.

The site may help avoid censorship. CoComment is a “service provider” and not a content publisher. Governments — especially in Europe and Asia — that try to hold publishers accountable for reader comments will have a more difficult time going after CoComment, the company hopes. It hasn’t tested this yet, though. The company emphasizes privacy. It tracks locations, but it does not otherwise require personal information.

Here are the top 5 countries/regions, as a percent of its total users:

Colebourne said he’s expecting trouble from the Chinese government, but hasn’t had any so far. The site can track comments in any language, although its user interface only supports six languages.

The company says it is talking with a number of large publishers in the UK who are interested in the protection it gives them (as opposed to having an in-house team that manually approves comments).

Incidentally, CoComment is based in Geneva and funded by Swisscom, a regional large telco there — CoComment wants to be the Switzerland of the comment-sphere, one might say. It is also funded by Netage Capital Partners, also the backer of Mixi, a popular Japanese social network. 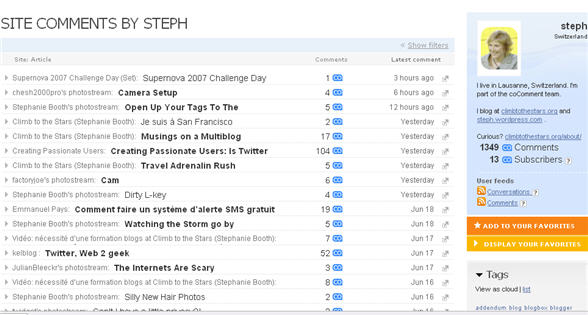