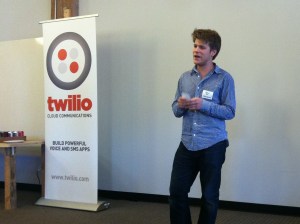 Code Summer+ follows the company’s Code Year launch at the beginning of January. In keeping with Codecademy’s vision for making everyone programming literate, the company launched a year-long coding curriculum, which has attracted 345,628 people to sign up thus far. Code Summer+ is in the same vein and encourages people to learn Silicon Valley’s coding languages like they would an internship — by doing.

“Programming is the new literacy,” said Zach Sims, co-founder of Codecademy, who went on to explain that New York Mayor Michael Bloomberg has signed up for CodeYear.

Chopra, who held today’s event at the Twilio headquarters to talk about Obama’s jobs initiatives, described Sims’ and Codecademy’s efforts as “redonkulous.” He explained that programming knowledge is what will ultimately unlock the huge silos of data the U.S. government holds. For instance, Chopra was particularly impressed with one coder who created an app using the U.S. government’s database of baby’s car seats. The programmer hacked together an app that allows parents to find car seats that are easy to install in various cars, as well as where to go to get it properly installed. 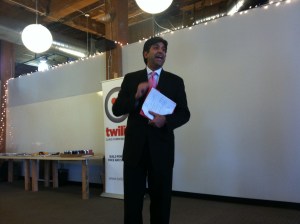 For Chopra, young people are driving this kind of innovation. Young people are constant learners, they’re doing and by doing, they’re learning. One student of Mitch Kapor’s SMASH (Summer Math and Science Honors Academy) program explained having an internship versus learning in the classroom as, “You can’t replace experience with anything.”

For this reason the government has decided to team up with Schema.org to create a summer jobs database young people can use to connect with potential employers. In addition to the Schema.org partnership, which the government once used to create a similar database for Veteran’s, Chopra has issued a challenge to Silicon Valley.  That is, to provide more internships and opportunities as the ground zero of innovation in this country.

“You can’t be in the tech community…without realizing there’s a big shortage of talent,” said Mitch Kapor, founder of Kapor Capital, at the event.

Tomorrow, Dr. Jill Biden and Chopra will thank the tech community as an end to a hackathon held with Code for America. This is where the tech community can start getting involved immediately. Inspired by the event, Chopra invited any developer able to build an app using Twilio to reach the National Resource Directory for those with limited access to computers.

Showing the power of programming knowledge, within a half hour of issuing the challenge, a Twilio developer had created the system. Developers still have time to win the contest, enter here.