The biggest challenges with adopting a new platform are unfamiliarity, uncertainty, and switching costs. Which is exactly why Google’s new Cloud Playground is a perfect way to get serious about tempting developers to switch from Amazon or Microsoft’s clouds.

Or to start developing in the cloud for the first time.

In literally two clicks, you can start a development project in the cloud, see its code, and start playing with an app on Google’s App Engine, Compute Engine, or Datastore. That’s exactly what I just did: 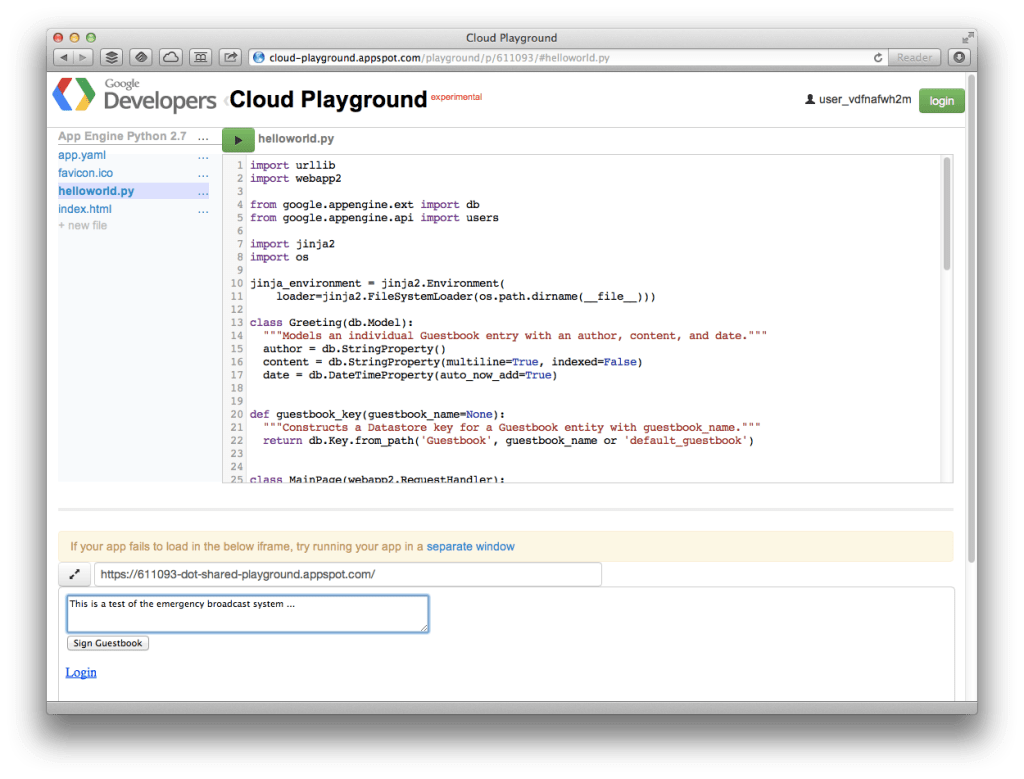 Sometimes you just want to dip your toes in, Google says, or try out some sample code. It’s impractical to go first through all the steps of installing the App Engine SDK, setting up an account, adding payment credentials if needed, and setting up an entire development environment. And by the time you’re finished, you’ve lost your motivation to try the code you just wanted to test.

Google’s new Cloud Playground destroys all those excuses to not try the cloud.

You can start with sample projects that Google has already created, or you can clone open source App Engine projects in Python from Github. Either way, you’ll looking at sample code and projects in seconds. Play with the variables, add a few lines of code, change some strings, and then the magic happens.

Simply click the green arrow button to watch your code execute on Google’s cloud platform, and see the results live in real-time in your browser window. Essentially, it’s like Codecademy for the cloud, Google App Engine for idiots, or cloud-enabled applications development for newbies. 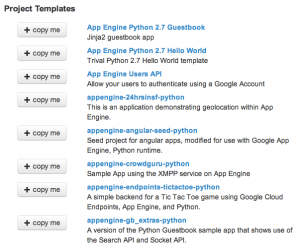 Above: Plenty of projects to copy and test

There are two major opportunities for Google here.

First, Google will find it much easier to get developers to consider its cloud services even when they’re already using Amazon Web Services, Microsoft Azure, or other cloud providers’ environments. It’s super-easy to give Google’s cloud a quick test-drive. That alone won’t drive migration decisions, but the toe in the door is a time-honored sales tactic for a reason: it works.

Second, Google is appealing to a massive cohort of developers and companies who are not yet using the cloud to build and deploy applications. With Cloud Playground, they now have no reason not to take a few minutes, an hour, or a day to play, and learn, and get a sense of what their apps would do in the cloud.

It’s just too easy to not give it a shot.

After years of yeah-it’s-there-but-so-what, Google is pushing its cloud solutions hard, adding PHP support for the five million PHP programmers around the world, and cutting prices by up to 25 percent to push Amazon on cost.

This new move is likely to open up the floodgates for cloud novices to try — and maybe buy — cloud computing services.