We’re already pretty impressed with Jive Software, a startup that integrates collaborative tools like blogging, wikis and forums into office applications through a single interface, and the Portland, Ore.-based company is still building momentum. Jive has acquired a web calendar startup called Jotlet, and it’s releasing version 2.0 of its Clearspace product, which offers some cool new project-management features.

As predicted in our previous coverage, Jive had a strong 2007, reaching more than 2,000 customers and doing more than $15 million in sales. Hersh says Jive’s success is due in large part to the popularity of its basic concept of “people, not files” (a dig at Microsoft Sharepoint, a collaborative tool that started as a simple file-sharing system) — more concretely, the core of Jive’s approach involves bundling all its collaborative tools together, rather than treating them as separate applications. But Hersh also says that in the initial release, some of the implementation was lacking, particularly when it came to making Clearspace useful for internal collaboration.

“There were still a lot of open questions,” Hersh says.

With Clearspace 2.0, Jive is hoping to answer most of those questions. The most useful new feature is a project-focused tool. Previously, Clearspace allowed you to track activity by department, which can become unamangeable once the groups become too big. Clearspace’s project-management application allows employees to take a much narrower view, through which you can keep abreast of meetings, milestones, specific tasks and so on (see screenshot below). 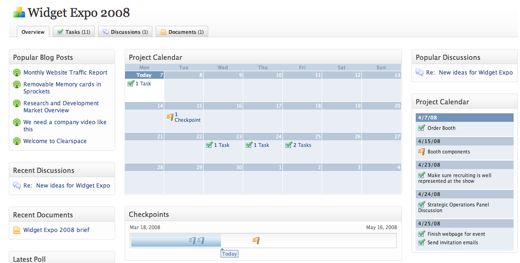 Also, Clearspace’s main employee page is now completely customizable, and documents can be shared with customers while keeping the information behind the corporate firewall (unlike Google Docs, which hosts documents on Google’s servers).

Each of these features is a nice addition, but as before, none of Clearspace’s individual components seems particularly innovative — there are plenty of other workflow management applications, such as LongJump, for example. What makes Jive stand out is the way it brings all these elements together.

That will probably be the case once it incorporates Jotlet’s technology, too. The Texas-based startup hasn’t gotten a lot of attention yet, but Hersh says it offers the only calendar technology he’s seen that allows you to build one big, shared calendar, then use APIs export individual parts of it — say, all the calendar events relating to a certain team or task. Hersh wouldn’t say how much the acquisition cost, but it seems like a good fit for Jive’s product.