The real-time search race is entering its next leg. After about a dozen start-ups rushed to launch basic search pages showing real-time results, a few are releasing application programming interfaces in hopes that developers will build a useful ecosystem of apps around them.

Collecta, a startup that models its architecture on financial data services, is the latest one to do this. It’s releasing an API today that will let other applications pull in its search results. For example, a Fantasy Football application could pull in real-time results from Collecta on all of a team’s players to let a sports fan know immediately how his favorite athletes are doing. Or a brand management tool could rely on Collecta to scour the web for what people are saying about a company in real-time.

“We watch as events happen and shoot it out to our users in real-time,” said Gerry Campbell, Collecta’s CEO. “There are many exciting possibilities. This could be optimized for brands, companies or events like wildfires or TV season premieres.”

Why’s real-time important? Companies like Collecta are betting that when you search Google, about a fifth of the time, you’re not necessarily looking for a comprehensive, encyclopedia-styled result, you’re looking for what’s happening now on the search term. Plus, because there’s a sufficient enough stream of user-generated content coming down the pipeline every second out of sites like Twitter, Facebook and Flickr, it’s time to figure out how to sort that by immediacy and relevancy. The problem with playing in the real-time space is that it’s difficult to retain mindshare for search when Google has become a household verb. Indeed, aside from Tweetmeme and OneRiot, traffic dropped off for every real-time search startup I covered back in June. By releasing APIs they hope to distribute their technology in other applications.

What’s unusual about Collecta is that it derives its architecture from financial data services. Although real-time data has become hot in the last year in the tech industry, it’s been at work for a few decades in the financial sector. (Think about how economic data or an earnings report has to be zapped around the world so that human traders or algorithmic trading programs can execute millions of dollars of orders in a split-second.) These typically rely on private data networks for reliability and speed. The web is more complicated, because of the sheer amount of data a search engine would have to crawl through continuously to provide a real-time service. Collecta uses the XMPP instant messaging protocol, which is the same technology powering Google’s communication and collaboration tool Wave.

“We’re not a financial service, but what we’re doing is we’re taking the best of that industry’s approach,” said Campbell, who was previously Reuters’ president of search and content technologies. “There’s a specific type of architecture that you need so that when a stock trade takes place in Beijing, traders can pick it up immediately in New York. It’s point to point.”

The company has raised a little under $2 million from private investors and True Ventures. 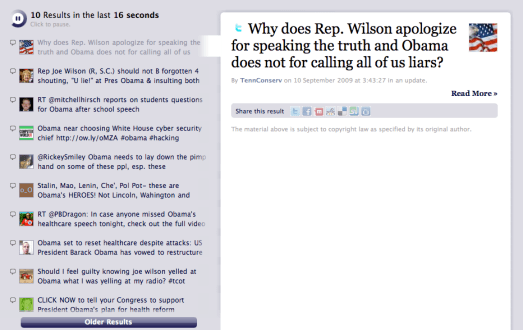