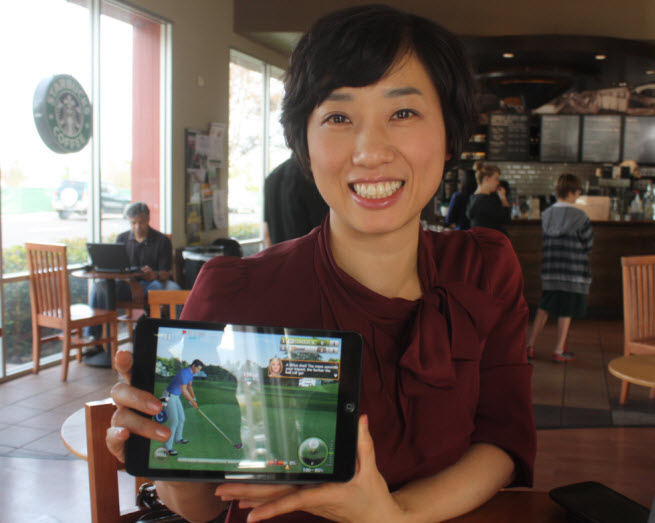 Com2Us is one of those companies that doesn’t come to mind when you think about games. But the Korean mobile game company doubled its market value in 2012 to more than $500 million, and it’s successfully expanding into other markets, including the U.S.

In South Korea, Com2Us has hit celebrity status. Jiyoung Park [above], who cofounded the mobile game company while she was a student in college, is one of the best known female CEOs in Korean history. And the company is starting to benefit from games that are available on fast-growing mobile messaging networks such as Kakao Talk in South Korea. Com2Us has five games on Kakao, and they have become the company’s biggest titles. It also has two titles on Japan’s similar Line service.

“On our own platform, it took us five to six months to grow a game to 1 million daily active users,” Park said in an interview with GamesBeat. “On Kakao, it takes only two weeks to one month to get to a million users. The market is really changing.”

The top games on Kakao Talk (particularly on Android) are generating $1 million to $2 million a day in revenue, just in the Korean market alone, and that’s why 95 percent of the revenue on Google Play in Korea now comes from games. Japan’s Line and China’s We Chat are also taking off. The question is whether this new craze for mobile games is limited to Asia, or it could take off here too. If it does, then game developers will have a powerful way to get their games discovered. That’s a huge problem in an age of app stores with hundreds of thousands of competing titles.

Park said that the growth of Kakao Talk reminds her of the growth of Cyworld, which preceded Facebook as a major social network. Such networks are a great way for game developers to get more users, as friend recommendations are trusted and a great way to spread word of mouth about a game. But Facebook discovered that users hate getting too much spam from games, and it moved to limit it on its platform. That slowed the growth of games, but it gave piece of mind to Facebook’s non-gamers. Kakao and Line may run into the same thing, but Kakao already limits the number of game invites.

Multiple game companies are benefiting from Kakao’s growth, which reaches about 50 million people. That’s not a huge number, but it is a very active market. In January, five Kakao titles were in the top 10 revenue generators on Google Play, even though not all of those titles is ranked in the top 10 games in terms of downloads. The games are light, with a lot of gifting that introduces new players to the games. The popularity of these games is making the cost of acquiring users lower. But the content is curated, so that it isn’t available to every game maker, Park said. In Japan, the market is dominated by “battle card” games, like GungH0 Entertainment’s Puzzle & Dragons. NHN’s Line dominates there, but DeNA and Gree are setting up competing services.

One of the keys to the growth is that the mobile messenger services access your contacts, which are people that you know. It contacts them without using expensive text messages. By contrast, the U.S. doesn’t have a dominant messenger service here. The closest equivalent might be logging into Facebook on your iPhone.

The mobile messenger games are the latest craze for Com2Us, but this company is not a flash in the pan. Park started the firm in 1998 (with college friends) in the days of WAP phones, and the company went public in 2007. It launched its first smartphone games in December, 2008. It has 500 employees, including six in the U.S. It has offices in Korea, Japan, and China. Com2Us has more than 60 games on the market, and it is launching a graphics-heavy golf game in the U.S. The games generate 35 million monthly active users for Com2Us, including three million subscribers.

Park realizes that the Korean market is small on the global stage. While Koreans spend money, they will hit limits at some point. So that’s why it is important for Com2Us to grow in the U.S. market and figure out how to get people to behave the same way in the here.

“We want people to play more games in the U.S.,” said Don Lim, general manager for Com2Us in the U.S. “It is a crucial market here. The cultural backgrounds are different, but we will make games from the bottom up to be suitable for the market here.”

One of the keys is upping the quality on 3D graphics for recent titles on golf and snowboarding. That means it is taking more upfront investment to make games, but the titles are still making use of freemium models such as free-to-play with virtual goods sales. Right now, all game development takes place in Korea, but U.S.-born developers are making contributions to the games. One of Com2Us’s tower defense games hit No. 2 for top-paid titles in the U.S. In the U.S., Park said her company will launch 20 games this year. Over time, Com2Us will publish more games made by other developers.

Overall, Park’s ambition is to make the company more relevant on the global stage of gaming.