Grinchy thieves have been stealing online shopping deliveries. So Comcast is announcing new home security camera features aimed at stopping the theft of packages from our front doors.

The new features for the existing Xfinity Home security cameras include the ability to filter motion activity by people or vehicles. And it has artificial intelligence that enables the Xfinity indoor + outdoor camera to automatically zoom in on the license plate of a car or the face of someone at the front door.

That kind of footage can serve as evidence for law enforcement. Last year, UPS said it would deliver more than 750 million packages between Thanksgiving and New Year’s Eve, and according to a new nationwide survey commissioned by Comcast and conducted by Wakefield Research, nearly one in four people report being a victim of package theft.

Xfinity customers can say “Xfinity Home, where’s the Grinch?” into the X1 voice remote to access still images captured by their home security camera right on the television.

“Home security cameras, when integrated with our other Xfinity services, offer great peace of mind so our customers can check-in on their home from anywhere, anytime,” said Eric Schaefer, senior vice president of Xfinity Services, in a statement. “On any given day, our Xfinity cameras can capture many motion-triggered video recordings. Our engineers used AI to create filters for People or Vehicles so they can more easily and quickly find the moment that matters most to them. Soon, we’ll add another filter for pets too.”

The Comcast survey also found 72 percent of Americans who live in a house or townhome take security measures to avoid having a package stolen, including having it delivered to a friend, family member, or neighbor (33 percent); having it held at the shipping center (23 percent); and staying home from work (22 percent). 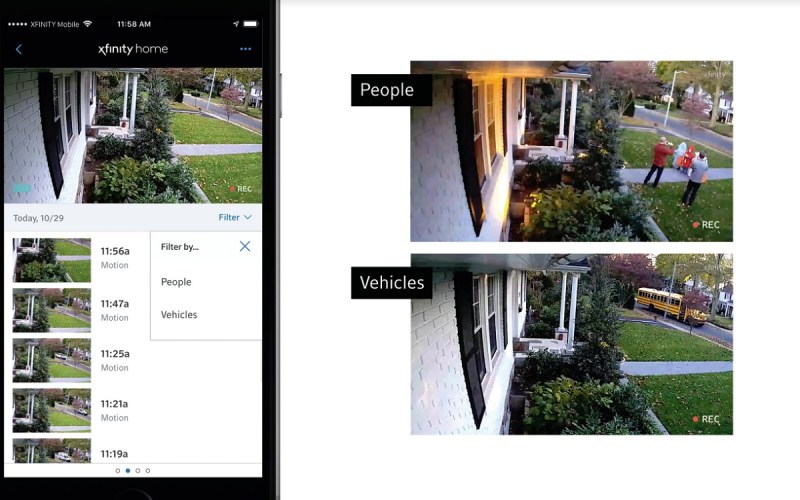 Above: Comcast security cameras can zero in on faces or license plates.

While nearly three in four (74 percent) of Americans believe having a visible home security camera is effective at preventing home package theft, only 31 percent actually have one.

Of those who have a home security camera, 74 percent say they monitor their footage more often during the holidays.

The survey of 1,000 U.S. adults, ages 18 and older, who live in a house or townhome, was conducted by Wakefield Research between October 26 and November 2, 2018 using an email invitation and an online survey.

Results of any sample are subject to sampling variation. The magnitude of the variation is measurable and is affected by the number of interviews and the level of the percentages expressing the results. For the interviews conducted in this particular study, the chances are 95 in 100 that a survey result does not vary by more than 3.1 percentage points, plus or minus, from the result that would be obtained if interviews had been conducted with all persons in the universe represented by the sample.