I use a lot of internet. My household typically has one or two dozen connected devices at a time, and I have never taken the time to think about the way each device passively and actively consumes data. But I want to change that … because of Comcast Xfinity’s data cap.

After a brief flirtation with DSL, which was a disaster, I’ve reluctantly returned to the clammy death-like embrace of Comcast’s Xfinity. The service is much faster and slightly more reliable than DSL’s glued-together phone lines, but it also comes with a 1TB data cap. I’m exactly three weeks into having Comcast, and I am 65GB over that limit. When I had Xfinity before, I went over 1TB every month without fail.

Comcast does give customers a grace period of two months where you can go over the limit without having to pay extra. After that, however, I will have to pay $10 for every 50GB extra I use. Or I could pay a flat fee of $50 extra each month for unlimited internet. The benefits of paying the $50 is that I never have to think about my surfing and download habits.

But is avoiding that anxiety worth $600 per year? That’s a cost-of-living wage increase for some people. That’s more than the cost of a console — I’m looking at you, Google Stadia.

I probably should pay more than most people

While I hate Comcast, I don’t feel like I have a foot to stand on when it comes to complaining about data caps. If I use significantly more water than my neighbors, I get charged much more for doing so.

And I’m sure I use significantly more internet than my neighbors.

I work from home and regularly download new games that are 50GB or larger. For gaming, I have my work desktop PD, a media PC, a laptop, an Xbox One X, an Xbox One, a Nintendo Switch, and a PlayStation 4 Pro all connected at the same time.

We also stream a ton of HD video. Sometimes my wife is watching Documentary Now on Netflix upstairs while my daughter is watching SpongeBob Squarepants in the basement.

Even worse than that, T-Mobile’s connection is garbage in my new home. So we have two smartphones connected to the Wi-Fi nearly all the time. 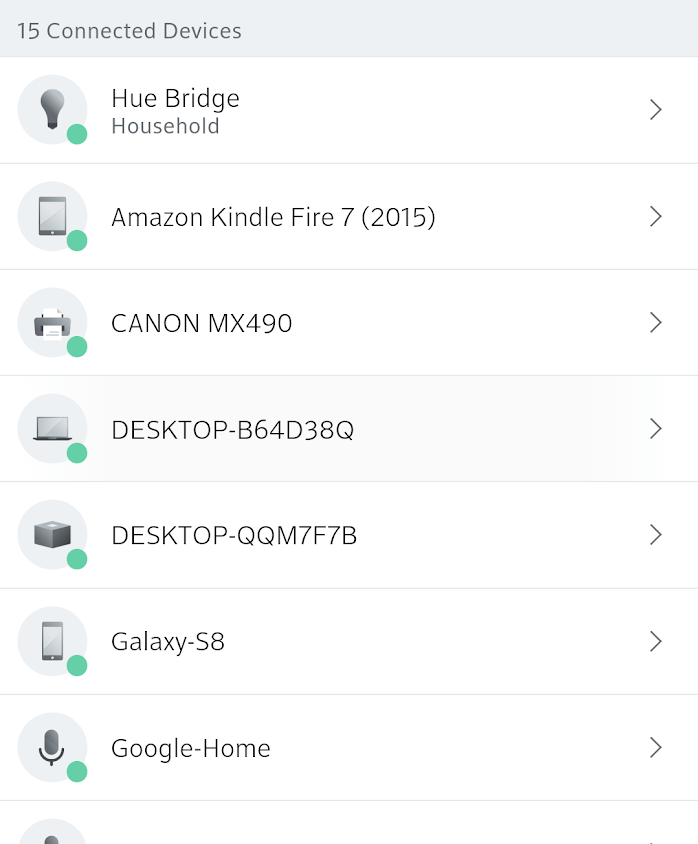 Above: That’s a lot of devices.

So yeah, that’s a lot of internet.

But the water analogy breaks down because the U.S. regulates it as a public utility. It does not do the same for internet. And unlike most other products and services, I do not really have a choice of ISPs. I have zero other options for equivalent or faster high-speed internet. The DSL service’s fastest option was more than 66% slower than what I have now.

If Comcast had some competition, I doubt I would have to pay $50 for unlimited data.

Can I beat the data cap?

Despite knowing that I probably should pay more than most people, I don’t want to. But I’m not sure I have a choice.

Since getting the notice from Comcast that I’ve gone over my limit, I’ve started investigating my data consumption. Xfinity pretends to make this easier for you, but that’s a load of horseshit. Its X-Fi app claims to give you usage stats for your connected devices — only nothing appears up-to-date. The phone I was using to look at the X-Fi app doesn’t even appear on the connected-devices list. You also have to look at each device individually. I saw no way to sort a list of devices by data usage, which would obviously help a lot. But least one of its stats seems accurate, however, and I’m going to work from that.

Unsurprisingly, my main desktop PC that I work from uses the most data. I downloaded several huge games earlier this month for benchmarking some hardware. X-Fi claims this device accounts for 17% of my daily usage. Honestly, I wish it was higher because then I could just focus my efforts on this PC. But I think I’m going to have to take a more holistic approach.

One of the other big offenders is the Xbox One, which averages out to 12% of daily activity. This is the device my daughter primarily uses to stream video when she’s with me in the basement. We use Prime Video for Tumbleleaf and Daniel Tiger. But I’m wondering if the auto-play is keeping it on long after we’re done watching. I’m also hoping that most of the data is coming from auto-updates for games I already installed.

I’m also worried about streaming on the Nvidia Shield, the media PC that also has Steam and auto-updates running, and our phones.

Here’s what I’ve done so far.

Steam doesn’t have an option to turn off auto-updates across the board. As I install new games, I will likely turn this option off. I have limited the time that games can auto update to just one hour in the middle of the night. Kinda makes me wish that Xfinity had something like the old “free texting after 9 p.m.” that only 2000s kids will remember.

I’ve also turned off auto-updates on the Xbox One X, which was just a simple toggle in the “System” options. Same with Epic Games Store. As I open up Origin, Uplay, the Xbox app, GOG, and a million other services over the next few days, I will see if I can do the same for them as well. 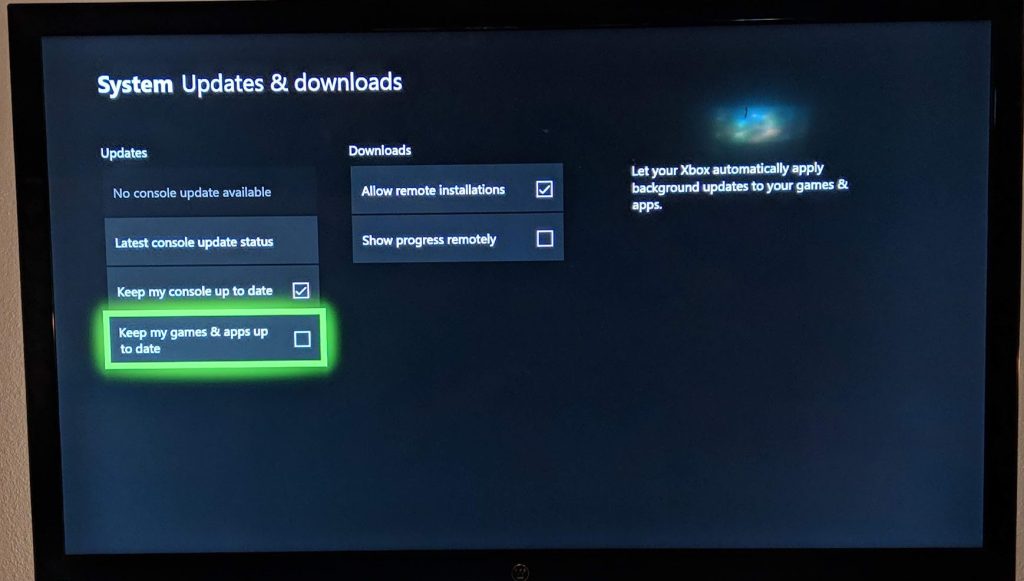 It’s going to suck when I want to go play a game and have to wait for an update, but Comcast Xfinity’s data speeds are fast enough that this should rarely take longer than a few minutes. I haven’t played the PlayStation 4 in a while, so I’m just going to set that to turn all the way off instead of going into standby mode.

The Nintendo Switch, meanwhile, doesn’t seem to use a ton of data except for when I’m downloading new games. I’m not gonna worry about that yet.

I’ve also gone into Windows 10 and told it that I have a metered connection. Who knows if that is going to actually do anything. I

This is actually much more complicated and frustrating than trying to control my gaming usage. We use Netflix, Hulu, Prime Video, YouTube, and probably some others I’m forgetting about. So it’s not like I can just go into a system-level option like with the Xbox and adjust some settings. Each app is different.

What I would like to do is to tell each app to generally play video at 720p — especially for my daughter. She doesn’t need SpongeBob in 1080p. But that isn’t an option in Prime Video, Hulu, or Netflix. What I can do is turn off auto-play. So now, if people leave the room, shows will stop ever just one episode.

Also, I think I might also re-configure my child’s TV time. Instead of watching Hulu or Amazon, I might just have her watch PBS using an over-the-air antenna. I like the other benefits of that as well. Daniel Tiger is on at a certain time, so she will have to eat lunch first and take a nap right after. At the same time, I’m looking into get a DVR for that terrestrial television as well.

For YouTube and Twitch, I’m going to stop using “auto” for quality. Instead, I’m going to set everything to 720p. And if I’m watching in vertical mode or in a window, I may drop down to 480p.

Smartphones and everything else

The last thing I’m doing for now is deleting a ton of apps off of my phone. Android tells me that the the Play Store is my biggest data hog, and I think that’s just about updating apps. I have way too much useless junk on my phone, so I’m going to slim that down. Hopefully it makes a difference.

I also looked at my data usage in Windows 10 and saw that syncing cloud apps like Dropbox and Creative Cloud near the top of the list. As part of setting up my metered connection, I set a bandwidth limit of 170GB per month for this machine. And background data is going to automatically pause when I get within 10 percent of that cap. I might even turn it off altogether.

Is this worth the effort?

If unlimited data was $20 extra per month, I would pay that without even thinking about it. But $50 really hurts. That said, I really do hate worrying about data usage. I’ve only just started doing so, and it’s a major source of anxiety.

I suspect that Comcast knows that most people like me are far too busy to attempt to manage their data. The company knows that we are stretched thin, and it’s charging that $50 because it can. And while I said earlier that I think I should pay more, what about the people who don’t use 1TB of data per month? Why aren’t they saving money?

The answer is because this is not really about metering bandwidth for people. It’s about exploiting an opportunity. It just sucks that opportunity only exists because people are too busy and Comcast doesn’t have any real competition.