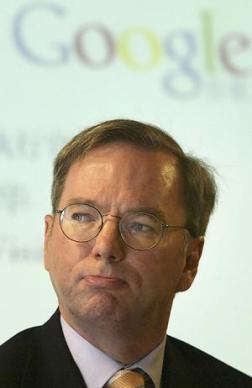 Google may be working on a new, intelligent news distribution system, according to Sharon Waxman, a reporter for Hollywood newsblog TheWrap. She approached chief executive Eric Schmidt at a soiree thrown by Arianna Huffington last week, during which she says Schmidt confirmed the development of a platform “that will bring high-quality news content to users without them actively looking for it.” The news feature would launch in about six months.

The details of the feature remain vague, though Waxman says Schmidt relayed several other details: Users will be presented with high-quality news that is specifically targeted to them based on “search words, user choices, purchases [presumably via Google Checkout]” without needing to first conduct a search; and the New York Times and Washington Post will be among the first newspapers to have their content delivered through this channel. These comments fall in line with Schmidt’s address to the Newspaper Association of America earlier this month, in which he briefly mentioned Google’s “entertain me” concept — the search giant’s broad strategy to provide streaming content tailored to users based on their previous behavior.

Despite the specificity of his claims in Waxman’s article, a source close to Google has raised serious questions about the veracity of Waxman’s claims about Schmidt’s comments. The company has not confirmed any of her post’s content.

This poses quite the conundrum. On one hand, we have Waxman, a reputable author and former correspondent for both the Washington Post and the New York Times, saying that Schmidt was concrete in his explanation of the new system, which seems very consistent with expressed goals. “Eric said the new system — or whatever the correct word is — would be rolled out in six months and start with the NYT and Washpost,” Waxman wrote in an email to me.

On the other hand, we have Google, a company that is usually tight as a drum when it comes to pre-announcements about products. I should note that Schmidt is very rarely, if ever, this forthcoming, about upcoming features. So was this all a miscommunication? Schmidt has already said the company doesn’t want to get into the content business — though it does make a lot of sense for Google to move into customizing news content, as users increasingly expect Google to cater to their interests.

So, what’s really going on?

Beyond that, what shape would this sort of news platform would take, and what influence might it have on the media landscape? One of the most salient points Waxman makes — that she says Schmidt confirmed — is that Google would use this new, highly-targeted news platform to “sell premium ads against premium content,” and that the newspapers included in the system would not get a cut of the revenue. That being said, the system would also drive more traffic to newspapers’ online properties and allow them to hike their ad rates as well.

So if there is, in fact, something like this in the works, it may have been pitched as a way to quiet print media grousing that Google’s alternative news channels are eroding newspaper readerships and revenue. Some have even suggested (mostly in jest) that Google buy one of the grand old metropolitan dailies as penance for what it has done to traditional journalism. Even so, it’s unlikely that the search company would make such a clumsy (and thinly-veiled) overture when there’s no way the boost in online ad revenue from the system would stem the carnage at most major papers. If anything, this might come across looking like just a meatless bone thrown their way — one that would only exacerbate complaints once revealed how ineffective it is in reality.

Regardless, all we can do for now is stay tuned and see what Google comes up with. After all, Schmidt hasn’t always had the smoothest relationship with reporters, as evidenced by his blacklisting of all CNET reporters after the site published personal information about one of the company’s founders. So we’ll keep an ear to the ground.

[Update: In response to a comment below regarding the similarity between the news platform described in this post and Google’s new “Whats Popular” gadget, the two are significant different. The goal of the latter is to aggregate content from across the web based primarily on crowd-sourced data, similar to sites like Digg and Reddit. The purpose of the former, if it even exists, would be to serve reporting from high-caliber news sources based on users’ previous behavior without them needing to define preferences at all. See Google channels Digg, Reddit with “What’s Popular” for more information on how they differ.]