Company earnings reports involve a lot of numbers. Unless you’re a student of Wall Street, or are following a company closely, it can be hard to decipher exactly what these numbers mean. Usually a good way to know how well a company did is to look at a stock price once the numbers are out. Last week we saw Google soar through the roof, going up over 20 percent upon beating estimates. Today, Yahoo’s stock is going up and down in after-hours trading — these swings are canceling each other out. This reflects Yahoo’s financial performance: decent, but nothing special.

This is important because many analysts and stockholders were looking to Yahoo’s numbers last quarter to see if there was something there that would allow the company to fend off Microsoft’s hostile takeover bid. Yahoo may have bought itself a little bit more time today by beating estimates, but the numbers simply weren’t good enough to throw away a $40+ billion dollar deal (which Microsoft is offering).

For those who like the numbers: Yahoo reported $1.35 billion in net revenues ahead of the $1.32 billion Wall Street estimate. Net revenues were up 14 percent from the year-ago period. Earnings per share came in at $0.11, ahead of the estimate of $0.09. However, Yahoo’s $121 million operating income was a decrease of 28 percent from 1Q 2007.

So the next question is: did Yahoo have a good enough quarter to make Microsoft raise its bid? Microsoft chief executive Steve Ballmer earlier today said he would not be raising the bid no matter what Yahoo reported today. However, as we’ve said previously, if it will get the deal done tomorrow without all the hostility, don’t be surprised if the bid goes up a few dollars a share.

Yahoo chief executive Jerry Yang also said during the earnings call today that the company was “raising our cash flow guidance for the year.” (see the chart below) Statements such as this make a compelling argument for why Microsoft perhaps should up its bid. 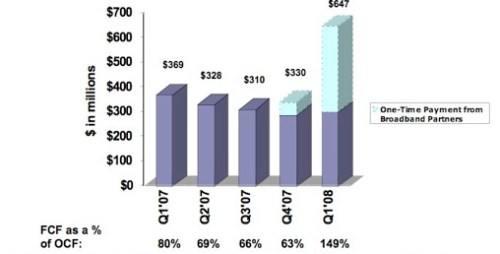 Yang did not shy away from the lion’s mouth. As soon as he got on the earnings call, his first main point was talking about the Microsoft bid. He spoke about his and the board of directors’ feelings that the bid vastly undervalues Yahoo. That said, he did say that all options were still on the table, “including a sale to Microsoft.” Yang promised the company was working hard to find a solution that would maximize stock holder value.

Just as Google did last week, Yahoo declined to elaborate on the two sides’ recent search advertising deal. Yahoo president Sue Decker said that it was premature to speculate on whether some sort of permanent arrangement with Google may come of this, as has been widely reported.

Other things of note from the call and report included an emphasis on international strength (just as Google did last week), an optimistic view of growth despite the weakened U.S. economy and a bullish outlook on mobile technologies/growth.

It’s been about two and a half weeks since Microsoft said it was giving Yahoo three weeks to enter into acquisition negotiations. Failure to do so would result in a hostile maneuver — quite possibly at a lower value than the current offer. The deadline comes on Saturday.