Reports have been coming in all weekend about how Thanksgiving and Black Friday online sales are up this year, in double-digit percentages yet again, but now the first raw number estimates are finally here. comScore has announced that Thanksgiving Day this year passed the $1 billion mark for the first time, and Black Friday managed to surpass the $1.5 billion figure.

More specifically, Thanksgiving Day saw a 32 percent gain, to $1.01 billion in spending. In addition to breaking the $1 billion record (which Black Friday first achieved in 2012), it’s also worth noting that this Thanksgiving (November 27) marked the first day of the 2014 season to reach such a level of spending. Naturally, the record was immediately broken the following day. 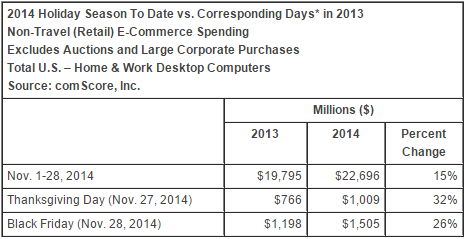 comScore naturally suggests this is good news for the upcoming holiday season. If Thanksgiving and Black Friday broke new online sales records, there’s no reason to believe Cyber Monday (tomorrow) and other days closer to Christmas can’t do the same.

“Thanksgiving and Black Friday both saw exceptionally strong online growth rates as each day surpassed $1 billion in desktop spending,” said comScore chairman emeritus Gian Fulgoni. “The strength we saw in the early online buying rush likely reflects a few things, including overall health in consumer spending, responsiveness to the strong deals being offered online, and perhaps some shoppers opting to stay home on Thanksgiving rather than head out to the stores that opened their doors early.”

It’s worth noting that these new records were achieved despite reports of outages and slowdowns. One firm found desktop and mobile ecommerce pages were 20 percent and 57 percent slower (respectively) this year, compared to 2013.