Online video sites saw more growth in December, according to Comscore, gaining more than 2.5 million unique viewers over November to reach nearly 141 million people in the US. YouTube once again sucked up the majority of the new traffic, seemingly at the expense of its many competitors.

One reason for the traffic surge, according to Comscore, is the maybe-close-to-over writers’ strike. Thousands of movie and television scriptwriters have stopped writing over the past three months to try to negotiate for a larger share of media companies’ online revenues, among other things. Television viewing, seemingly for lack of fresh programming, has been dropping.

We’ve been interested to see if large media companies’ video sites and the current rash of competing online video startups (our coverage) could make headway against YouTube, in this context. Fox, Viacom, have among other things hoped to differentiate their video sites through offering their own, professional-quality videos, like clips of John Stewart’s The Daily Show.

Google video properties, 97 percent of which is comprised by YouTube, actually gained market share, with 32.6 percent of all video views in December (3.3 billion) up from 31.3 percent in November (3.0 billion). Meanwhile, the closest competitors stagnated or dropped.

Users watched an average of 41.6 videos on YouTube, but watched an average of 8.2 videos on Myspace, even though Myspace had 40.5 million viewers versus YouTube’s 77.6 million. The difference in number of videos watched may be because Myspace users are watching videos in the context of browsing the social networks’ web pages while YouTube viewers go to YouTube specifically to watch videos, on the other hand.

Update: Views have grown more than 34 percent since Comscore began tracking videos in January, 2007, with a seven percent increase in December alone. 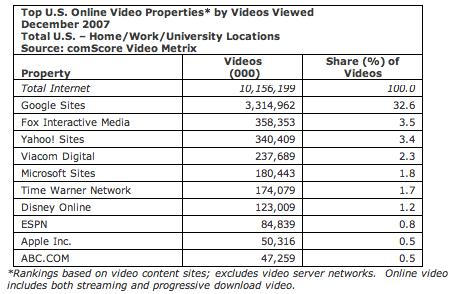 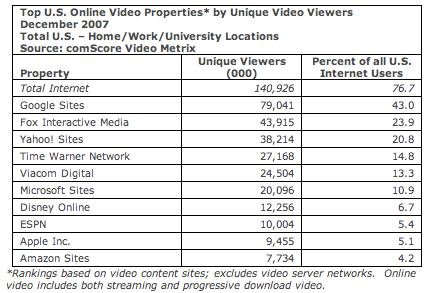 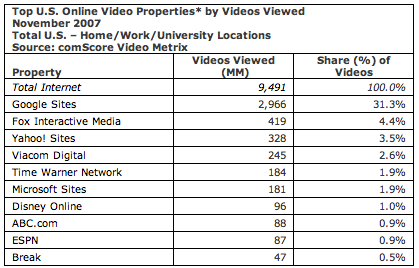 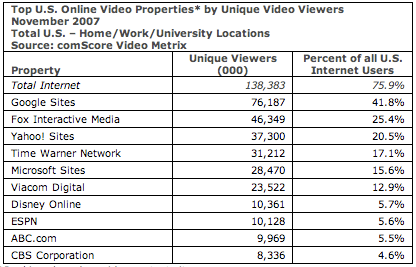