I have to admit, I’ve been a little skeptical about scheduling startup Presdo — I previously gave it the benefit of the doubt because founder Eric Ly (who cofounded professional networking site LinkedIn) is obviously a smart guy. Yes, Presdo makes it really easy to set up meetings, but so do competing companies like TimeBridge. Now, however, I’ve seen the winners of Presdo’s developer contest, and I’m sold.

Basically, Ly had a very smart idea for how to build functionality for his product. There are a lot of areas where Presdo needs to expand, but it’s a small startup, and its team can’t tackle everything at once. Instead, it released an application programming interface (API) for Presdo and offered iPhone 3Gs to developers to build applications that made Presdo more useful. There wasn’t exactly a flood of entries (11 total), but I guess that’s okay, since Presdo was only offering three iPhones. More importantly, the winning applications look really good. 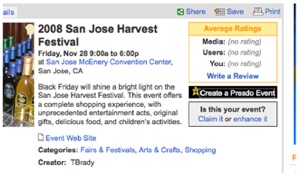 The top contest entry is an extension for the Firefox web browser. When you’re looking at an event on sites like Facebook, MySpace, OpenTable and Gmail (which is really the most important scheduling tool of all), the extension adds a button to “Create a Presdo event” (pictured, left). Then you can work out the details of the meeting on Presdo, whose interface saves you from the flurry of emails that usually ensue. Ly and I once speculated about applications that might integrate Presdo with Facebook or MySpace; a Firefox extension accomplishes that with both sites, and more. The extension also uses Growl to provide a list of upcoming events on your desktop (pictured, below).

It doesn’t look like the extension is available on the Presdo site yet, but as soon as it is, I’m going to download it and play around. This could bring a lot more organization to both my professional and social lives. 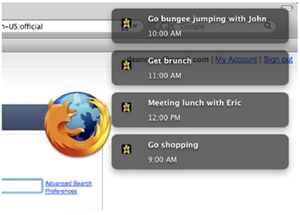 The first runner-up is, appropriately enough, an iPhone application. So when you’re meeting someone in-person, you can set up future meetings via Presdo on your iPhone, rather than taking care of things when you get back to your computer. The second runner-up integrates Presdo with Microsoft’s email service Outlook.