Touted as a “drop-and-hook” marketplace, the new Convoy Go offering has been in pilot mode for a couple of years ahead of today’s nationwide U.S. launch.

Founded in 2015, the core Convoy platform serves as an on-demand marketplace to connect truckers with companies that need to shift cargo from A to B. It effectively matches supply with demand and streamlines journeys so the nearest available driver is matched with the most appropriate load. With Convoy Go, the Seattle-based company is going a step further in its mission to expedite load deliveries by reducing the wait time for truckers from three hours to less than an hour.

Drop and hook is an established process whereby a carrier drops an empty trailer at a shipper’s facility and collects a trailer of goods that has been preloaded — according to Convoy, drop shipments represent the majority of Fortune 500 company shipments. But such processes have typically been the domain of larger asset-based carriers that have the capacity to leave spare trailers behind. Convoy Go gives carriers across the U.S. access to Convoy’s nationwide pool of managed trailers that can be preloaded by shippers ready for collection.

A carrier can search for drop-and-hook loads that let them just turn up with their power unit (the engine and cab). Convoy provides the trailer network as part of Convoy Go, enabling smaller carriers or owner-operators to better compete with bigger transport and logistics companies. From a truck driver’s perspective, this allows them to maximize their time on the road and the number of loads they can complete — which should translate into more revenue. 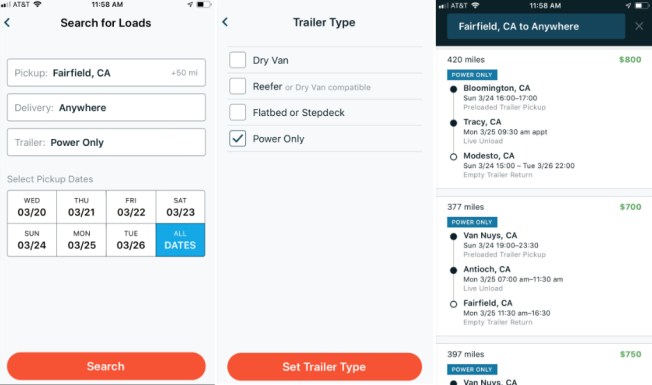 The trucking industry generates well over $700 billion in revenue in the U.S. alone and represents around 80% of all freight revenue in the country. As such, a slew of technology-infused companies are reaching for their piece of the pie by helping shippers and carriers optimize their operations. Los Angeles-based Next Trucking recently raised $97 million to expand its logistics platform, while Uber is increasingly expanding its transport infrastructure to the trucking realm with Uber Freight. Last year, Uber Freight actually announced a service similar to Convoy Go, called Powerloop.

Convoy, for its part, has raised north of $260 million since its inception, including a hefty $185 million round late last year, and it claims big-name backers such as Alphabet’s CapitalG and Amazon founder Jeff Bezos.

“Convoy’s data shows that up to a third of the cost of truck freight in the U.S. is attributable to time spent either waiting for appointments or waiting at the dock to load and unload,” noted Convoy Go product lead Tito Hubert. “This massive amount of waste has a direct impact on increased transportation costs, decreased drivers’ earnings and reduced overall trucking capacity for shippers. We built Convoy Go to enable drivers to increase their productivity and earnings, all while providing shippers with greater capacity.”