The makers of some of the most graphics-intensive console and PC games are heading to mobile, with help from DeNA. 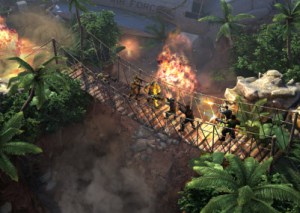 Above: A fight on a bridge.

If there’s any sign that the game business has gone global, this is it: a German game developer is using a Japanese mobile game publisher to publish a free-to-play game in the U.S. and other territories around the globe. The Collectables features Crytek’s signature outstanding 3D graphics based on the CryEngine game engine.

It’s also a sign that even big game developers sometimes have to turn to mobile specialists in order to break into free-to-play mobile games. DeNA can handle tasks such as player acquisition, distribution, promotion, PR, and cross-promotion with other mobile games.

The Frankfurt-based Crytek has made huge console and PC games such as Far Cry, Crysis, and Ryse: Son of Rome. But mobile is becoming more interesting as a market, with the user base for smartphones and tablets crossing the 1 billion mark worldwide.

DeNA will publish the game on iPhone, iPad, and Android devices via Mobage. In the game, players lead a squad of unconventional soldiers on do-or-die missions around the globe. The game has over-the-top gunfights and big action heroes, with diverse enemies and 3D battlefields. It comes out in 2014.

“DeNA offers unparalleled experience in the mobile gaming space, and we’re excited to be collaborating with their team to deliver The Collectables to players,” stated Paha Schulz, director of business development for games-as-a-service at Crytek. “The Collectables will be the first free-to-play mobile game that leverages Crytek’s cutting-edge 3D game technology CryEngine.

Crytek has been around since 1999 and it consistently wins awards for its console and PC games. But it has moved into free-to-play downloadable online games with Warface, and now the move into mobile shows the company is expanding into digital gaming.

The game’s trailer shows the 3D graphics are pretty good, but it’s not clear if the movement is really that fast. The battles also look like they’re all being fought at point-blank range. That looks like a byproduct of making the game work on an iPhone.