Amidst all the noise surrounding the new “Google Killer” search engine Cuil, a quiet United Kingdom startup called True Knowledge is today announcing a second funding round and further progress on its product. I got a chance to take a look around, and found an impressive variant on search in the offing.

Long before Google came around, Internet users were already getting used to searching the way we do today: Enter a term or two, hit a button, and hope you get links to useful pages. Many are looking for a particular fact or bit of information, but they still have to look through whatever results are given.

Rather than search, True Knowledge is working on what’s sometimes called an “answer engine” — a technology designed to cut out the searching and just give you the fact you’re looking for. Google, Ask.com and others have taken baby-steps toward offering something similar, but True Knowledge may soon be able to run circles around their efforts.

The reason is that True Knowledge is doing two things the competition isn’t. First, it’s working with natural language processing to understand whole questions, rather than keywords within them (as Google would). Second, and perhaps most importantly, it’s building its own giant database of facts — rather than attempting the Herculean task of making software capable of understanding the unordered information of the Internet, as Powerset is doing.

Take the example below. I want to know when Arnold Schwarzenegger was born, but I decide to ask when California’s governor was born instead (perhaps I can’t remember how to spell the name — is it Arnold or Ahnold?). True Knowledge has in its own database who the governor of California is, that it’s Ahnold, and when he was born, so it can return a direct answer. 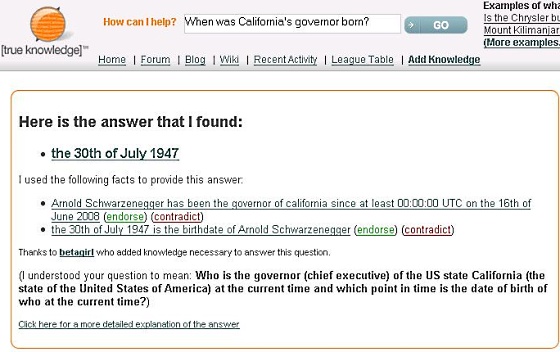 The idea of the semantic web is to re-structure the written information on the Internet so that machines can understand it, and many companies are slowly beginning that process, which will take years to complete in full. Wikipedia, for example, keeps information like that in a specific location, and Google began offering “OneBox” results in 2006 based on answers and information it digs up around the web. But True Knowledge stores its own data, classified and tagged with attributes, and does its calculations based off it.

The result is the ability to come up with many more answers to all sorts of questions. (My favorite so far: Can a can can can? Answer: No, a drink container can’t dance the can-can.) True Knowledge’s founder, William Tunstall Pedoe, says there’s an additional advantage. “Because we understand the question, we know when we can’t answer it,” he told me, noting that regular search results are also offered below the answers.

What True Knowledge is limited by is the data it has access to. That’s no small limitation. If you think of the company as somewhat analogous to online encyclopedia Wikipedia, it’s still in early days, and there is a lot of knowledge that needs to be added.

Right now, True Knowledge is in private beta with about 10,000 users. It will be competing with Freebase, the semantic database at Metaweb, which took $42 million earlier this year, to find users who are willing to add data. Pedoe says True Knowledge’s current scheme for drawing information out of users, a long question-and-answer routine, will be smoothed and improved over the next few months with an eye toward a public launch in the first half of 2009.

My own test of the engine showed that there’s a lot of data already present, especially on subjects like city locations and famous people, but plenty that still needs to be added, as well as work to be done to make sure queries are understood. The process will take years even with support from volunteers, but unlike efforts like Cuil, which disappointed many yesterday with its public launch (click that link and scroll to the comments for evidence of how much so), True Knowledge could be useful right now.

The company took an additional $4 million from Octopus Ventures, bringing its total to date to $5.4 million. True Knowledge is based in Cambridge, England. For a few more query examples, click below.

Google can already do some things that True Knowledge can do, as evidenced by this question: 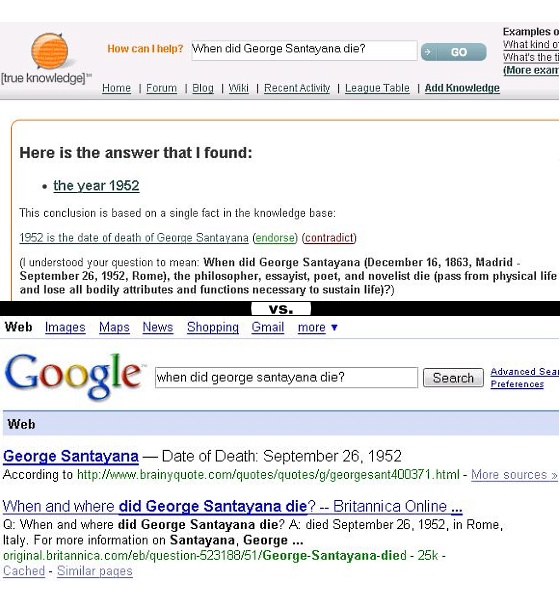 Below, True Knowledge gets the answer right despite itself:

Note the string of associations True Knowledge goes through to answer this next question: 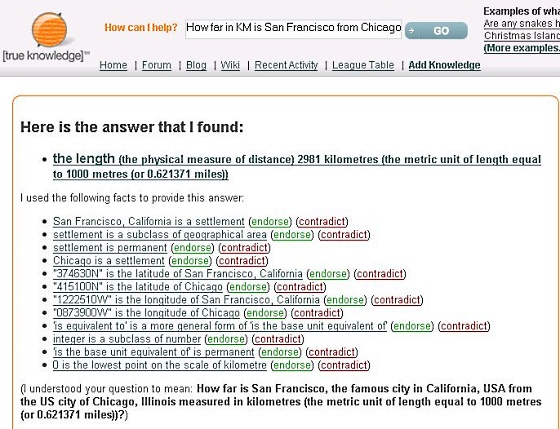