He has $1 million in the bank, a promising new company and a rolodex that makes Silicon Valley swoon. 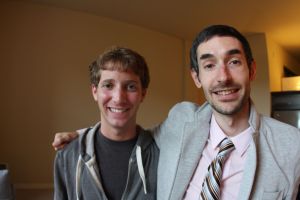 I’m interviewing Levy in our office when he takes the call. As I wait, I cannot shake his eerie resemblance to Mark Zuckerberg. It’s not just his curly hair, the hoodie, the strangely similar necks and chins. It’s the fact that this teenager is wicked smart with serious ambition. He wants to change the world.

“Worried parents,” he sighs as he hangs up the phone. “They live in Houston. They always like to know where I am and what I am doing.”

What he’s doing is remarkable for someone his age. He is co-founding a startup called One, which has created a mobile app that notifies you when people around you share your interests. You create a profile, and when someone with similar interests is right next to you, you get a notification. Levy and his co-founder, 28 year old Michael Callahan, have the ambitious goal of making missed connections history.

“How do we meet the important people in our lives?” asks Levy. “It’s all about situations. I like tennis, and met my best friend because he was carrying a racket. We started talking because of that racket. What if he hadn’t been carrying it that day? We want to prevent people from walking past each other and missing a chance to know each other.” 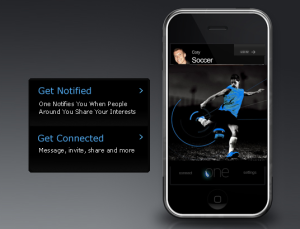 The app makes its initial debut at the end of this month at UC Berkeley, when students get back to school. He’s timed the launch carefully, so it will be available after the noise of signing up for classes and extracurricular activities has quieted.

“You need a large number of users in a small geographic area, so we’re focusing on college campuses,” explains Levy. “We’re going from campus to campus. We are emulating what Facebook did. Why did Color launch to everyone? Why are all of these companies trying to build a network by launching publicly? Exclusivity is key.”

Color is a good analogy. Like One, the startup is focused on making connections between people based on physical proximity. The fuse was lit when Color raised $41 million earlier this year. The result was more of a fizzle than a ka-boom. Early reviews indicated users weren’t as excited as a $41 million company should make them. It still hasn’t taken off. One will also face competition from apps like WhosHere and Skout.

After Berkeley, One will launch at University of Texas and University of Illinois. One tracked invite requests on its site to see which schools got picked.

Dearing doesn’t talk to the press very often. A current Stanford professor and former senior vice president at eBay, Dearing has quietly backed innovative and successful startups. His greatest hits include AdMob (Google acquired for $750 million), Xoopit (Yahoo bought for $20 million), Mixer Labs (Twitter acquired) along with other startups like Widgetbox, CafePress, Polyvore and BloomSpot. You’ll be hard-pressed to find him talk publically about himself or these companies.

In this case, he was happy to talk.

“Three people in the same week told me to meet him,” says Dearing with a chuckle, recalling how he met Levy. “He’s got charisma and the courage to use it. He reaches out to people and is self confident in the best way. He finds interesting people and interesting things to talk about. He can connect with people and that deep desire is reflected in his product.”

I ask if he can find something negative to say about Levy.

“He’s the real thing,” says Dearing. This validation from Dearing is one of the best you can get in Silicon Valley. “You can’t do what he’s done at his age without intense focus and discipline. The reason you haven’t been able to find red flags is he hasn’t had much time to accumulate them.”

Levy spent one year at University of Illinois studying computer science, where the university had recruited him for his entrepreneur talents, he says, “just like an athlete.” But what he was really studying was how to sell himself and his ideas. He did an independent study with Paul Magelli, the senior director of the Academy for Entrepreneurial Leadership at U of I. Magelli is also scholar in residence at Kauffman Foundation, advising on entrepreneurship initiatives.

“Cory is ‘the’ mythical example we use in class, except he’s for real,” says Magelli, as he puts down his Chicago-style hot dog to do an interview. He’s just landed in Chicago, and called as soon as this interview was requested. “I’ve been teaching for 57 years and you wonder when in your career you’ll get a Cory. He makes you rethink the proposition as to whether entrepreneurs are born or made. He’s so young. How did he absorb it in 19 years? He’s an enigma.”

Levy says he’s taking a break from school to work on One. He’s not sure how long that break will last.