Crackle, a Sausalito company once known as Grouper, ditched user generated video when it was acquired by Sony last year — saying that YouTube had won the user-generated video showdown.

The story of Crackle is instructive. It began signing deals with content creators, paying them to produce quality shows, and negotiated distribution rights. This created legal clarity, and advertisers like it. However, even here, there are challenges; more on that in a sec.

For now, advertisers are pouring in, says Josh Felser. “It’s like night and day.” He won’t say exactly how much money is coming in, but he’s making well into the millions of dollars a year. He’s still not profitable, given the investments he’s made in artists at the outset, but getting there.

Meanwhile, placing ads on user-generated sites, even on leader YouTube, has been extremely difficult to do – with analyst Mary Meeker estimating that YouTube would get a mere $720,000 in additional revenue by adding such ads – a paltry sum when you consider Google paid $1.6 billion acquisition of that company (indeed, the number was so low that Meeker later changed her assumptions in an embarrassing correction). Other user-generated companies have fallen by the wayside, unable to contain costs.  Tod Sacerdoti, who runs an online advertising company Brightroll, recently gave up on advertising on user-generated sites, because of the danger posed to brands by raucous images like the ones he blogs about here (scroll down, only if you can handle quasi porn).

Meanwhile, at Crackle, Felser shows what is like to be free of the messy user-generated stuff. He is cutting deals with independent studios, promising them distribution through Sony’s massive pipeline. Usually, Felser negotiates exclusive distribution rights for a time. He’s bought rights to productions by National Banana (Felser assures us the studio is much more impressive than the National Banana web site would have you believe), which features producer Jerry Zucker, the guy behind Airplane! and Naked Gun.  He’s also bought rights to 30-Second Bunnies, and Brian Dalton’s comedy series Mr. Diety, about God and the Universe. It’s all running in a channel called Moving Targets which launched a few days ago.

[However, we should note that in watching the very first video on the site, we found the material pretty disgusting. It features a National Banana video of young kids talking about nothing other than ditching panties, rehab, drinking, throwing up, tits, sex and breast implants; amusing for some, but hardly fare that would please advertisers. Crackle, in our view, holds promise, but we’d recommend it look closely at the sort of video it’s featuring. National Banana continues to disappoint; it’s hard to believe it raised venture backing from US Venture Partners.] 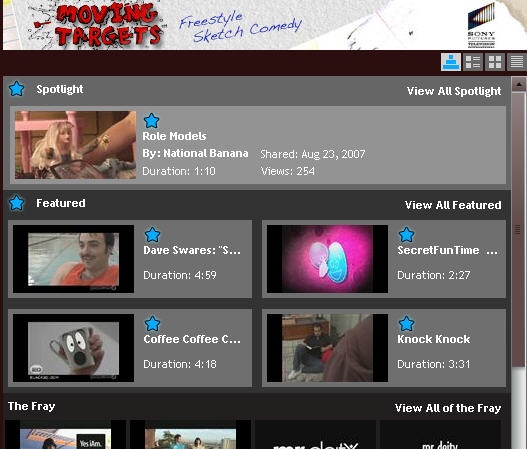