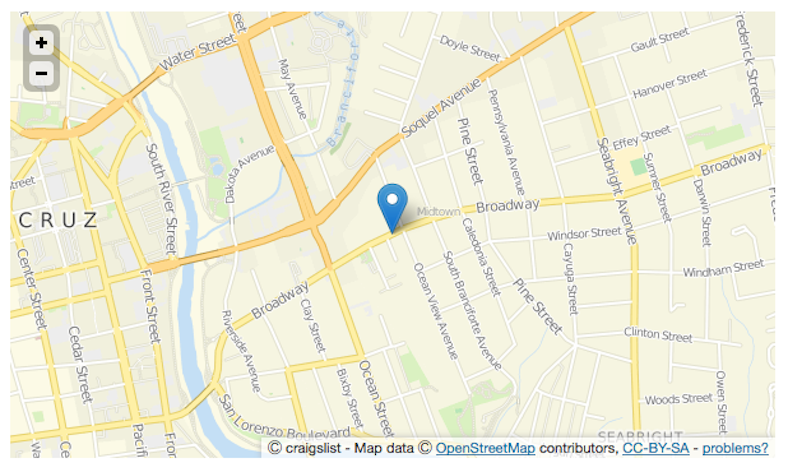 Craigslist appears to be creating its own version of PadMapper, the apartment-rentals website that overlays apartment listings on top of Google Maps, making it easier to browse by location.  TPM caught this feature, and it says that this is currently being tested in San Francisco and Portland areas.

VentureBeat checked and confirmed that embedded maps appear on some apartment listings in both areas.

Apartment hunters in these areas can now see a map in Craigslist’s apartment classifieds with a pindrop over the location of the rental. The website is using OpenStreetMap, which is a “free wiki world map,” which Apple also uses to supply some information to its maps app. The traditional links to Google and Yahoo maps, which Craigslist has had for awhile, are still available at the bottom of the listings.

Unlike PadMapper, the Craigslist listings show only a single location at a time. This should make it easier to find your way to a prospective pad, but it doesn’t simplify browsing by neighborhood, unless Craigslist decides to add more features.

PadMapper currently does its mapping using Google Maps. The website collects apartment advertisements from around the web and shows them as pindrops over a map. It used to include Craigslist data until the online classifieds company told PadMapper to back down. For awhile PadMapper respected that request, until PadMapper founder (and sole employee) Eric DeMenthon decided that his site saved apartment hunters time and that he owed it to them to continue serving up as many relevant listings as possible.

From there he teamed up with 3taps to pump Craigslist data to PadMapper without scraping its servers, but Craigslist still wasn’t satisfied. It sued both PadMapper and 3taps in July.

Since then, Craigslist even added a clause in its terms of use that gave the website “exclusive” rights to all submitted listings — meaning people selling items through Craigslist would not be allowed repost their advertisements anywhere else. After chatting with the Electronic Frontier Foundation, however, Craigslist removed this clause.